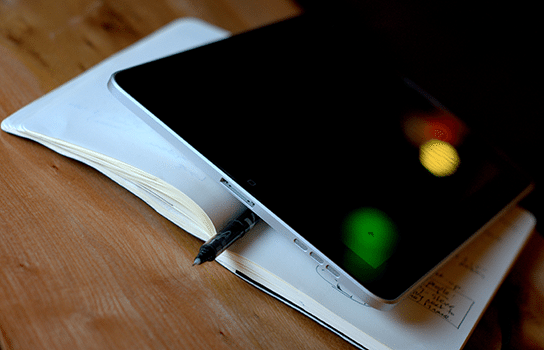 This post first appeared on Sam’s website, and has been reproduced here in full with his kind permission.

It’s 3am and I can’t sleep. It’s more than likely because I’m still on Wrestlemania body clock, that time of the year where I stay up all night for 2 days and then wonder why I can’t sleep at a healthy hour. It could also be because it’s becoming increasingly hard to switch off. It’s been like that for a while.

The romantic in me would like to pretend I fully remember a time before the internet was a central fixture in my life, but it gets increasingly harder as time goes on. However the ways in which my relationship to this new (anthropologically speaking) technology is ever changing.

The internet has always, however, been pretty central to my musical existence. From myspace, to podcasts, promoting shows and the new wave of social media excess. In fact, it is probably fair to say that my life would be pretty different without it. I almost ended up in advertising ten years ago!

I’m increasingly feeling swamped in technology. The desire to air every thought, mostly negative. The feeling of wanting to share every great thing I see, to use the internet as a diary and to snoop in on others, friends or stranger. Twitter for me is a weird one. I’ve been in the melee with it at times, from the weird impulse to start @riotcleanup and the subsequent strange week or so, the excitement and tangibility of @occupylondon and its unfortunate implosion, to my increasing sense of anger and disengagement with the musical community.

I’m not convinced my relationship with it is healthy behaviour, in fact I know its not. One of the main reasons I can’t sleep is that I use the internet to relax. I read some political things, I read some football things, I look at cats, I check out a music video, I catch up on the F4W daily, check my twitter, my metrics, you get the drift. Sounds exhausting right? More often than not it just leaves me restless and angry. The led nightlight of my tablet is rarely the best idea first thing or last thing, yet it’s my number one bad habit.

There are SO many arguments, often due to either mis information, mis interpretation or trolling (can’t we just call it bullying, as that’s what it is.) The technological interface circumvents a lot of our human, conversational instincts. The disconnection of tone, facial expression and the ability to rationalise through collective discussion is so important to establishing healthy debate. There are cliques, often informally ruled by power brokers within commercial communities, it feels like school only through the eyes of a teen movie filter. The consequences of which are often a collective set of ideals that are amplified and occasionally militant.

More often than not, good things get twisted. I see more arguments about equality and fairness than about anything else. Petitions are rife, often for good but increasingly disarming the lobbying community (it is instrumental in charity work) by undermining their platform, is not going to have good long term consequences.

That’s the key for me, long term consequences. The internet is great, in the most part, but with all major technological revolutions, comes widespread social change. Within 20 years, it is predicted that 10 million UK jobs will be replaced by machines, using an internet interface. The evidence is already there, on the highstreet and in my own industry. Commercial enterprise will either evolve or collapse (and get bailed out by the government at our expense) yet the human cost is hard to establish, but I imagine it to be as complex as our species. However a day feels like a year on a jam packed time line. Next year feels intangible.

The internet is a part of the world, but it is not the whole world. It amplifies our negatives, our insecurities and titillates. At the same time it educates, informs and connects. It is complex but also only partially representative. So the next time you feel irrationally angry, take a pause and bring context in to the equation, whatever the situation, it will help. There is a world outside of this bubble, it is beautiful and full of life and wonderful folk, it is also a bit of a mess at the moment. Its ok to be scared and confused by the world we live in and its developments, that is an ok feeling to have and that is not said enough.

Use technology to your advantage, enjoy the rich tapestry on offer but let it be the sidebar to a richer life. The human friends you make online, meet them, share with them, build something complete (online AND offline.) Balance how much you give up to the internet, keep some things for yourself. Share your challenges and fears but dont rely on collective discussion to dictate your path ways, there will always be sad people trying to disarm you or manipulate your choices.

I find myself calming down when I take a few days away from the internet. I’m less angry and more rational. I’m also more disconnected. I want both. A healthy relationship with technology but the ability to assimilate it into my world without it becoming the dominant force.

Life is hard, the internet has only made it harder. This is not how this was supposed to work and this is not how we were designed to be. Somewhere out there is a middle ground and I am going to strive for it in my personal life. I urge you, if you feel similar to me, to do the same. I’m sure it’ll be worth it. Whatever happens though, if things are getting really hard, speak to a human, the compassion from a person will always be better in real life and I’m sure there is someone out there who will be able to help, understand or offer perspective. We are designed to be collective as a species, lets not forget what that means in its purest sense.