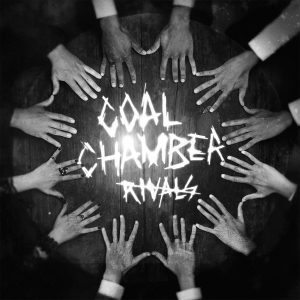 The purveyors of all things spook core are back to debauch your senses after a 13 year hiatus with their fourth studio album, Rivals. Forever on the periphery of mainstream metal, Dez and his cohorts are down-tuned and dirty on every track. There is no return to form here as Coal Chamber never lost their way sonically. Whilst Chamber Music may have been a more gothic approach, the style was unmistakably Coal Chamber’s.

Dez and Meegs have always done things their way sonically and as the first track off their new release spews out of the speakers, it’s blatantly obvious  – like it or leave it. As the instantly recognisable screech of Meegs’ guitar beckons you in, you’re punched in the face with the spinal column that is always Coal Chamber’s rhythm section, then barked at by the guttural growl that can only be Dez. ‘I.O.U. Nothing’ is just one big fuck off to, well, whoever really.

And it doesn’t stop there. The riffs, the groove, the absolute massiveness comes in troves on Rivals. To further rub the snout of any industry that had their meat hooks in the four piece they invite the modern day antithesis of all things mainstream, Al Jourgensen to belch out a track alongside them. ‘Suffer in Silence’ is all the elements that make Coal Chamber who they are. The nursery rhyme style haunting, the huge and crushing guitar (Meegs has always been an underrated guitarist in my opinion. Like a freakin Sith Lord of high gain dynamics) and without a doubt one of the best rhythm sections to drive a metal release this year.

Rivals boasts some of the tightest drum parts and slickest bass lines of their career with grooves to rival (some pun intended) that of any of their, unfairly labelled, nu/groove metal brethren. Just as Faith No More have proven this year, a lengthy absence from the scene is by no means a death sentence. Your release can be just as epic (more pun intended) as all you’ve birthed before.