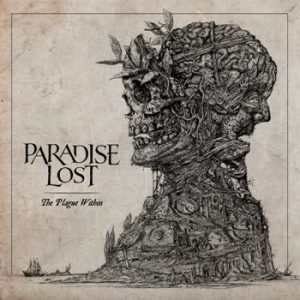 I’ll be honest, I kinda lost track of Paradise Lost somewhere around the late 90s. After being introduced to them via the sublime Draconian Times album, I wandered off into other musical territories; dipping in and out of the band’s albums sporadically. Although I am proud to say that I still have my singles of ‘Say Just Words’ with the first day purchase embossed logo! So here we are in 2015 and with their 14th album The Plague Within I’m happy to report that the music is as unique and exciting as it has ever been.

Over the course of 50 minutes, Paradise Lost display the kind of gothic-tinged, heavy riffs that established them as a force to be reckoned with in the heavy music scene. ‘No Hope In Sight’ opens the album with a crushing, juggernaut of a verse riff so heavy that it almost breaks your speaker cone. ‘An Eternity Of Lies’ blends a sweetly-melodic motif with a riff that twists and turns with surprising fluidity considering how sludgey it is. I’m actually running out of ways to describe how heavy and crushing this album is…. ‘Beneath Broken Earth’ teeters so close to collapsing under its own weight it’s like sitting on the edge of your seat when you listen to it. ‘Flesh From Bone’ picks up the pace with a snare drum pattern that will is frantic and battering. ‘Sacrificing The Flame’ with its haunting, ethereal melody and groove is classic Paradise Lost. Special mention for ‘Cry Out’ that has a fantastic bouncy riff which begs that this track get an outing on future live shows.

Back in the day, Nick Holmes was often compared to James Hetfield, unfairly so. There is much more diversity in Holmes’ voice and it’s put to great use on this album, running the gamut of vocal styles from across all albums; there are the melodic tinges of One Second/Host, the guttural sounds of Gothic/Shades Of God to the bellows of Draconian Times. Musically, this album is heavier, darker and slower than previous offerings. And, like your favourite album of theirs, it takes you on a journey through the recesses of your soul. This is not an album (or a band) that you listen to casually; that you play in the background. This is an album (and band) that demand your attention. It demands you join them on the journey the album takes. It demands that you commit to the experience.

As they approach their 30 year anniversary, Paradise Lost have distilled everything you love about them and incorporated it into this record. Sounding as vital as they ever did, this record further cements Paradise Lost’s legacy of excellence. It’s heavy, dark, doomy, gothic, haunting, lyrical….. it is Paradise Lost at their most potent, at their most magnificent. Long may it reign.