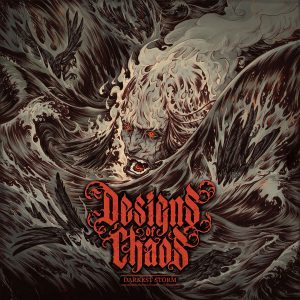 The Darkest Storm is the new three track offering from modern thrash metal five piece, Designs Of Chaos and is just a mere taste of things to come for the boys.

‘Darkest Storm’, ‘Social Phantom’ and ‘Strength in Numbers’ are an awesome sonic tribute and tragically, the last time you’ll hear the behemoth that was Designs Of Chaos’ founding drummer behind the tubs. In a truly unfathomable turn of events last year, the driving force behind Designs Of Chaos, the man mountain, precision sticksman and possibly one of the nicest guys on the planet, Chris Crammond, was killed at work. In absolute honour of their fallen brother the band pushed on with friend Andy Bramley behind the kit and have dropped onto our aural cavities three of the most punishing thrash metal tracks you’ll have the pleasure of hearing all year.

There is no new ground broken here, but this is a brutal slice of extreme thrash executed to perfection. Endless riffs, punishing percussion, bowel rumbling bass and monstrous vocals are abound in this teaser. Once you’ve started listening to the tracks it is obvious why these guys were on the brink of dominating the UK scene. By the third track it’s even more apparent they’ll dominate yet again. This is a commanding slice of UK metal, well worthy of your attention.