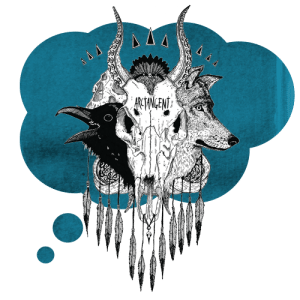 We ask the bands what would make their ATG Dream Come True, and their favourite memory of the past 2 years.

· Dear ATG genie,
I would like the following wishes to be granted and your next convenience:
– Battles to headline (with their original line up)
– Showers for everyone (we’re playing Wyrd out festival on Sunday in London after the festival this year and we are going to stink the place up!)
– Steve Vai to join us on stage to rip a guitar solo, but promptly gets bottled off stage before he even gets a chance to switch his soloing fan on.

Favourite memory: · Definitely playing our daft little RATM medley at the end of our set at ATG 2014 with Tom from Alpha Male Tea Party (also featuring Nick Duke from TrojanHorse at the end, an uninvited but more than welcome guest!). Best gigging experience of my life certainly.

Well about 12 years ago I first saw Dillinger Escape Plan, and I was sure that one day “ONE DAY…!” I would work towards playing a festival with those guys, and now here we are, sharing the same stage as them. So I Guess thats one dream already fulfilled.

Favourite memory? It would be easy to say “that thing that I did with Cleft last year”, but I wasnt really supposed to do that, it just happened. SO I guess last year, just coming to the festival and being there was the favourite memory as a whole. Being around so many excellent people and meeting a new bunch of friends. I think ATG is going to foster a lot of relationships that will only benefit the underground music scene in the UK.

What??? My personal dream come true??? For Billy Rymer from Dillinger to fall ill before their set and somehow you know….I’m lurking around backstage, and their all like “YO, IS THERE A DRUMMER IN THE HOUSE?!?!?” And I’m all like “SURE, I’LL PLAY!!” and then I rock up on his kit and spew up on myself because I’m really fucked from all the Pistonhead I’ve drunk….

Well who could forget our Tom getting up with Cleft for the RATM jam at the end of their set from last year? Having AK/DK revive me from a catastrophic hangover was brilliant, they gave me a second wind, they did. &U&I were sublime last year too. Ben our engineer and I stormed the FOH tent during the silent disco to have a go on the lights…. Sorry to the nice lighting lady, we won’t do it again!!

Steve – My dream would be to get free chips and burgers all weekend. I’m pretty wild you know.

Steve – I haven’t attended ArcTanGent before in this particular manifestation of the universe. However, in a previous existence within another dimension, I once saw Eric Morecambe and Ernie Wise guesting for Steppenwolf on the main stage. Honest I did.

I’m sure every band has the same ATG dream; to headline one stage or another. We’d just love to play after dark on the Bixler… attached to giant trampoline harnesses!
Our favourite memory was opening the Bixler stage on the first full day of the very first year. I think that will be something we’ll always remember. We expected to play to no one and by the time we’d finished our first track the stage was absolutely rammed. We were very new and had barely played 3 shows ever.  It was an incredible experience.

I think just playing it is good enough for us. Headlining the Arc stage would be amazing fun though so I’ll go with that wild fantasy.

We didn’t actually experience this first hand but were regaled about it the morning after by Joe from Body Hound. Last year, in a total drunken haze, Scott, unbeknownst to him, got in the wrong tent and fell asleep. Minutes later the owner of said tent returned, saw Scott in it, pulled him out in a rage and screamed “IT’S BREAKFAST TIME MOTHERFUCKER!!” before attempting to batter him. That’s when Joe stepped in and saved Scott. It became a kind of cult story. We heard people we didn’t know shouting it at each other the day after and I (John) got a video message from my friend Richard weeks later while he was in Germany where he had run into a native who had heard the story as well. Madness.

We’re delighted to be playing as part of the festival so thats already enough of a dream come true, if it stays sunny for the whole weekend then thats perfection right there!
Our Bixler takeover on the last night was definitely a stand out memory from 2014’s festival, a few of us got “Permission” to have a party in the bixler at about 4am, the lonely security guard I think expected maybe 5 of us but when about 50 people started dancing around in the bixler to a bluetooth speaker he quickly wanted us out to continue the party at the bottom of the campsite. Russian Circles Carpe was a massive highlight from last year too.

Obe on main stage supporting Steely Dan. Obviously! They would play the entire of ‘Can’t Buy A Thrill’ then ask me (Chris) up to sing ‘Only A Fool Would Say That’ with them. It wouldn’t be very good. But…. total musicgasm.
Favourite memory: 2014. Russian Circles in the pissing rain. It was fucking glorious.
And for us? Well, our ArcTanGent dream came true last year, (which also happens to be our favourite memory) when this happened. No pressure guys, but we wouldn’t turn our noses up at a repeat performance!