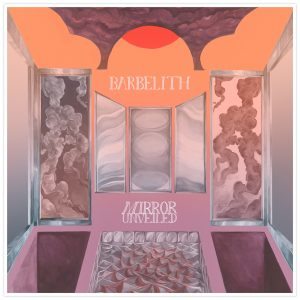 I’m going to be mentioning Deafheaven a lot in this review. It’s really hard for any band that plays this kind of fuzzy shoegazing black metal to avoid the comparison, but Barbelith deserves it more than most. For a start, drummer Austyn Sullivan plays the same complex support role as Daniel Tracy does for Deafheaven. His drum kit has a fantastic raw sound and his elaborate, fast paced style of drumming is perfectly designed to be the foundation of Mirror Unveiled.

This structure is crucial because Barbelith offers a whole river’s worth of meandering in the two almost 15 minute long songs that make up the majority of this album’s runtime. Without any sign of choruses or effective hooks, the band largely uses tempo changes and ambient passages to keep these songs varied. It’s really impressive that Barbelith can make songs this long, which held my interest all the way through, but they’re derivative of Alcest and Deafheaven’s longest tracks without the masterful use of dynamics that makes songs like Écailles de Lune‘s title tracks and ‘Vertigo’ so compelling. They’re really good, but a few more distinctive passages would have made them great.

Mirror Unveiled‘s most interesting ideas are packed into its shorter tracks. Austyn stands out again as ‘Beyond the Envelope of Sleep’ begins with the most incredible minute long drum fill, while ‘Reverse Fall’ uses isolated snare hits to halt and restart the song. There’s even a bit of October File’s droning groove to the start of this song, later becoming dual guitar leads that are somewhere between Immortal and Amon Amarth. These are the kind of key moments that Barbelith’s longest songs are sorely missing.

Mirror Unveiled is post-black metal at its best, but it is too firmly bound by the constraints of its genre to be an essential listen. Though Barbelith effectively makes use of the genre’s tropes and techniques, they are too close to their inspirations. If there was more to separate Mirror Unveiled from its peers, like Ghost Bath’s use of lead guitar melodies or An Autumn For Crippled Children’s ambience, it would be unmissable.