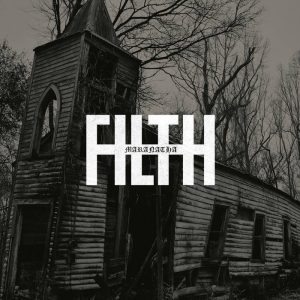 Maranatha play sludge mixed with the toughest hardcore you’ve ever heard. Until writing and releasing their debut full-length Filth, Collin Simula was the sole creator and member of Maranatha. After releasing the ‘Spiritless’ EP in 2013, he decided to start playing live. He invited longtime friend Jack Huston to play bass in the live incarnation of the band, eventually asking Huston to join Maranatha in an official capacity. Their new record is enormous and raw, with lyrics that speak to the despair and pain of life.

The band’s lyrics are as heavy as the riffs. Simula’s lyrics are a personal outlet. He battles depression and uses his pen to face the anger and disappointment of betrayal. He admits that sometimes his lyrical content is over the top, but when he’s dealing with something he tries to fully explore his emotions. Personal loss, heartbreak, friendships ending because someone made a horrible decision, and anger and bitterness, Simula confronts it all. He wears his heart on his sleeve. “All my heroes are cowards and thieves” and “Tear your face off or I’ll do it for you”, he howls.

Musically Filth continues down the path that the band began travelling on Spiritless. ‘Despair’ is the opening track, but the record really gets rolling with ‘Heroes’. Simula’s writing chops have progressed and he’s incorporated more hardcore into the sludge/doom from the last EP. ‘Patriarch’ hits close to home lyrically. The song deals with issues of abuse and breaking that pattern when raising children of your own. ‘Violet’ is a quickie, clocking in at a breakneck 0:51. ‘Numb’ follows that with crushingly slow pace and an oppressive guitar lead. The breakdown at 2:35 is straight up tough-guy hardcore. This song is musically my favorite on the album. ‘Depressive/Oppressive’ is another standout, with its plodding heaviness and the ending cry “I was born with a curse”. ‘Black Eyes’ is a mosh’n’roll banger with a killer sludge groove in the middle.

The album ends with the instrumental track ‘Misotheist’. Simula said the song originally had lyrics about misotheism and his interest in people that believe in a God but hate his existence. Simula is a christian, while Huston is a former christian turned atheist. The contrast in their belief systems creates an interesting dynamic, and Simula’s willingness to address his own dark emotions is refreshing. The album clocks in at just under 34-minutes. The short run time keeps the down tuned, dissonant guitars from becoming stale. That’s the one risk that Maranatha skirts. It’s also one that Simula addresses in this in-depth interview on the As the Story Grows podcast.

Filth is as heavy as they come. Monstrous riffs combine with angry hardcore and intimate, bloody lyrics. The band that started as a one-man emotional outlet is growing into a fearsome beast. Maranatha is releasing Filth on New American Records on July 24. You can pre-order it here.