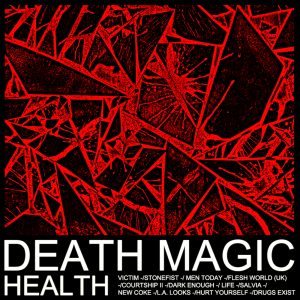 HEALTH have been pretty busy the last few years despite not releasing a new album – until now – since 2009’s Get Color, a record that saw a shift from pure electronic-tinged noise rock to catchier and linear dance-ridden tracks. The band in the meantime has been putting out singles and making music for gaming giant Rockstar Games; compiling a complete soundtrack for Max Payne 3 and a version of The Units ‘High Pressure Days’ (retitled ‘High Pressure Dave’) for the Mirror Park radio station on GTA V… and both were fucking stunning.

Now we have their first record, DEATH MAGIC, in six years and they’ve changed direction again, maybe more drastically than ever before. The noise is still there but it’s not as abrasive or takes so much a priority for it on the album. Instead, HEALTH concentrate more on mood and cohesive songwriting rather than experimentation. They manage this while constantly flooring you with some of the most depressive vibes I’ve heard on a catchy electronic album in a long time, and although some tracks pound, there’s a feeling of sedation throughout – especially when it comes to the lyrics and vocals.

The introductory track ‘VICTIM’ opens with a strong The Haxan Cloak feel, soaked in gloom thanks to the horn-like siren that takes up most of it. Then we have the visceral ‘STONEFIST’, which slashes immediately with razor synths, but back out and leave the drums and bass to provide a simple beat, while lyrics “We both know / Love’s not in our hearts” lay soothingly in the mix. The razor synths return for a few more stabs at later moments, two extremely contrasting sections.

‘FLESH WORLD (UK)’ and ‘LIFE’ are both really interesting for one reason: they have a really, really heavy Pet Shop Boys sound to them. Both have pop sensibility, but while the former is what you’d expect to soundtrack a dark rave with an insane laser show; the latter showcases the band’s talent at doing the complete 180 and doing it well. You just need to hear them to see why.

Then there’s ‘COURTSHIP II’… if it’s in relation to the ‘Courtship’ from their self-titled release, then it’s as the evil brother. The playfulness and humour in the 2007 track is non-existence on this one. It’s completely brooding, and great.

Personal favourite ‘SALVIA’ jumps in with these tribal and relentless machine drums in a post-apocalyptic world that basically carry the song by themselves, it’s just a shame that the track is so short at just under 1.50 minutes, it easily last three times the amount and keep listeners hooked. The following track ‘NEW COKE’ is close behind as a favourite too, just sounding huge and the jarring feel between the “Life is good” chorus and the end-of-the-world sense through the instrumental. It’s heavy.

Altogether, DEATH MAGIC is a dark beast. It’s a weird and unexpected transition for the most part – the dancier atmosphere was sort of expected after Get Color, but HEALTH’s step into the dark side wasn’t something I saw coming; but they do it justice, and with style. A change like this might split fans depending on the releases they prefer, but this is an album to sink into, it definitely needs time to be absorbed. That said, this is a bizarre experience and for all the right reasons, hearing this material live will be really interesting.