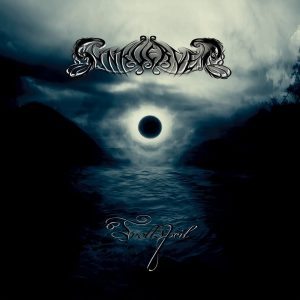 Released on December 12, 2014 via Independent

Synkvervet are a melodic black metal band from Norway, that describe themselves as neo folk. They were formed by Ingemar as a one man instrumental studio project in 2011. When recording the debut album in 2013 Vår Avmakt he realised that he needed vocals and brought in a vocalist. For Trollspeil the band was expanded to include a guitarist, a drummer and two further vocalists.

The album begins with ‘Horns of Vengeance’, which starts off with a slow atmospheric opening  until the growling vocals kick things of. The guitar and drum work start of heavy and continue like this throughout  the song, which begins to add symphonic melodies to add depth to the music. The second song ‘The Horde’ starts of atmospherically again before the drums bring in the band this time. While starting of similarly to the opening song, the song becomes more symphonic about half way through before we get the clean vocals from Christina who started off as a guest before becoming a full member of the band. The next track ‘Breathtaking’ is not as heavy, but is more epic and symphonic. ‘Inner Sanctum’ is the highlight of the album starting off with a nice piano melody before the music begins with clean male vocals, before the growling vocals come in and make things heavier again. The song weaves between the two styles as the song builds to its epic conclusion.

‘Marenatt’ makes things heavier and darker again until the epic elements come in during the second half of the song which leads nicely on to ‘Ektet I Elven’, the lead single which showcases the various elements that make up the album, including the three different vocal styles. These elements are also present throughout the final four tracks, as the album builds to its conclusion.