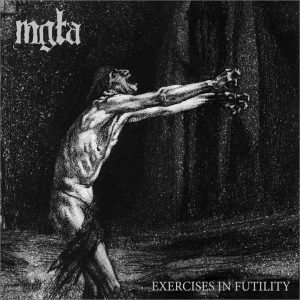 There are black metal bands and then there are black metal bands, if that makes any sense. Those who tend to stick to the pragmatic approach as defined in the first and second wave of black metal and then there are those who push the boundaries of what’s possible. Enter Mg?a, a black metal band from Poland, who have pushed the boundaries with every release, from EPs to full-lengths. In 2012 they released With Hearts Towards None, which blew me away from an expectation point of view as I expected much of the same from the EPs. The EPs in their own right are fantastic. I feel however, they’ve put themselves on a different plateau completely when they released With Hearts Towards None.

So one might say the expectation for the new album would be even higher with a future release and most bands can’t deliver. Mg?a are finally ready to release their third full-length on the 4th of September 2015, titled Exercises in Futility, which has been leaked all over the Internet, which is a shame actually, however the band stated on their Facebook page this past weekend that they’ve uploaded the full album to YouTube and it has been modified as such and recommends waiting for the release for an optimal listening experience.

I couldn’t help myself and got stuck into the album and anyone who is familiar with their work has noticed that the concept of their albums can be described as a listening experience, a journey, which has been meticulously crafted to tell a story and should be experienced from start to finish in order to be able to gauge the magnitude of their work or message. I’m of course speaking of personal experience. So you’ll see that each track is a self-titled track with added number to indicate chronological order in which the album is meant to unfold itself. Well, I think that’s the idea, but let’s not digress.

The music is cold and grim as you’d expect and they’ve stuck to their sound, which has served them so well over time and sends chills down the spine, but one cannot help but noticing some nuances in the way the music is structured and they sent me back listening to the whole discography to experience the change in soundscape over time. Based on that this album is ahead of its time, a master piece that doesn’t lend itself to much critique as it does admiration and praise. But let’s dissect it even further.

From a musical point of view, it has been excellently crafted and you could listen to it over and over and over again, it will just keep getting better and better with each listen. From inception with regards to writing process to execution and final product, it has been crafted and perfected and it reflects in the song writing. The riffs are incredible, the drumming is incredibly tight and they go together like ebony and ivory on a keyboard, each of which in its own right compliments the other in a way that is almost unfathomable.

Now, the listening experience can only be enhanced when you read the lyrics. The lyrics might seem like gospel of nihilism, consumed by the cynical at heart, but one cannot help, but ponder the meaning of life and the futile existence of mankind, with no purpose but to destroy itself and to perish from this hollow existence, which seems a bit grim and it might be, but the harsh reality is a universal truth, which is by no means popular.

I find that music that can take you on that journey though, but when it can point your psychic in a direction and enlightened you to some of the simple truths, everything else seems rather futile, which in the grand scheme of things, it probably is.

This is a fantastic album, not only from a musical point of view, but from a journey of thought and reflection. It all comes to an end with a simple verse that goes something like this “As if all this was something more than another footnote on a postcard from nowhere, another chapter in the handbook for exercises in futility”.

So, did they deliver on that expectation? In my opinion, they blew that expectation out of the water and have yet again pushed the very boundaries of what is possible. This is my record of the year without a doubt.