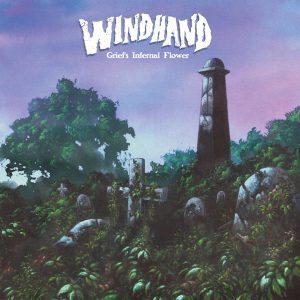 Released on September 18, 2015 via Relapse Records

Richmond, Virgina’s Windhand are a band that are now at the forefront of doom. After a successful debut album, two splits and a lot of touring, they struck up a deal with metal powerhouse Relapse Records and were presented to the world. Their Relapse debut Soma was a masterpiece by all accounts, and it will be a tough one to follow. The pressure is most definitely on.

Grief’s Infernal Flower has the ingredients of a great doom record, and I have been looking forward to it immensely, particularly due to the fact that Jack Endino is at the helm of the recording duties. But let me say this from the start, it just doesn’t quite make it into the territory that Soma occupies.

The album itself sounds fantastic with everything given the rich attention it deserves. The vocals add to the hypnotic element of the songs with their dreamlike presence while the drums punch straight through the thick blankets of heavy fuzz, which cover the guitars and bass at all times. However, the album falls short just ever so slightly in other places. It manages to lack enough variation in the actual songs themselves. Both guitars play the exact same parts as each other most of the time, and while this probably sounds amazing and crushing live, it becomes a little tedious and monotonous when you listen to the album frequently back to back.

For me the most interesting parts of the entire album are when the band jam out one of the many ‘psychedelic’ sections that are present throughout. These sections are great and showcase where the band’s strengths on the album truly lie. The same goes for the acoustic songs like ‘Sparrow’. I believe they break up the album wonderfully, and if they decided to one day craft an entire album of songs like this, I’d probably buy it.

Standout tracks for me are ‘Crypt Key’, ‘Tanngrisnir’ and ‘Hyperion’. These three songs in particular showcase when the band really hit their stride on Grief’s Infernal Flower. These songs are shorter and stay fresh and interesting because of that, showing that the band have a good grasp on dynamics with their much simpler ‘verse, chorus, verse’ structure. Had it been an album full of songs like this, it certainly would have been 2015’s Doom Album of the Year.

It’s a solid album, just nothing that is breaking boundaries.