Poly-math were one of the craziest, funniest bands to play ArcTanGent 2015, so, naturally, we jumped at the opportunity to interview them not long after they’d come off stage. Unfortunately we realised we had no way of identifying them on the tape so just imagine them answering as one big, Borg-like Poly-math monster.

(((o))) (Hannah): Which here, is a really good achievement for Saturday

Polymath:We did have to wind our necks in last night, a bit. We didn’t do the silent disco. 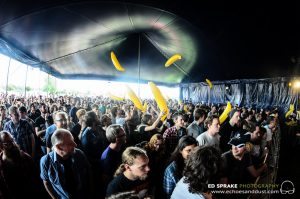 (((o))) (H): Tell us about the bananas? (They launched 40 odd inflatable bananas in to the crowd during their set)

Polymath: We thought buying 40 inflatable bananas would be a good idea There was a squeezey bottle of tequila at the front as well, sprayed that into a few people. A few people didn’t realise it was tequila…

I left it at the front of the stage, so we had plenty of time to warm up

Polymath: Two years we were playing! (laughs) No, the line-up, the line-up’s awesome every year, we know so many people here because through the year you end up meeting new bands and touring with people, it’s such a small scene that you know you’re going to meet up with people.

(((o))) (D): We asked this question to Cleft and I imagine your answer’s going be quite similar, when you started Polymath, did you ever imagine for a minute that you’d be playing to a field full of people bouncing up and down and singing your songs back to you?

Polymath: Absolutely not. It wasn’t even a proper a band when we started, I think our first gig we had a different name. It was just a side-project. Four gigs in, we ended up playing Bixler (at the first ArcTangent) opening on the Friday

So, it was a bit of a surprise and obviously, it was the first year of the festival so, we didn’t know what to expect. I don’t think anyone did really… 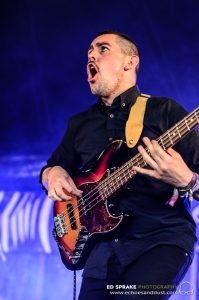 To see people there, when no one’s ever heard of us. We were like ok we might be doing alright so, we thought let’s see how far this goes and we started recording a bit more and stuff and three years later we’re back!

(((o))) (H): I feel like since the first ArcTanGent, every band we know has massively upped their game because they know there’s actually a market for this.

Polymath: This is why this is so good, you’re looking at everyone and there’s so many good performers out there. Kind of spurs you on a bit but worries us as well!

It makes me a little bit gutted, I thought we had this sort of atonal thing down but, Body Hound just absolutely smashed it! But, we had bananas. We’ve become a gimmick band!

Polymath: I guess we need to get bigger bananas!

(((o))) (H): Did you see the guy holding up an actual banana, after they all flew out? Then he threw it and it got stuck in the bass amp! 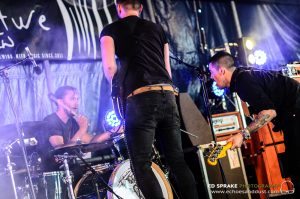 Polymath: That is brilliant, amazing.

Polymath: We’ve just finished recording our next release already, about six weeks ago.

Polymath: I suppose it’s an EP, there are three songs on it but, t’s about 35 minutes long. So, we’ve just finished recording that with Lee the same producer who did Reptiles.

It was really good, we’re doing longer songs this time with more dynamic changes, a bit towards Proggy things. We’re mixing in September so, we haven’t released it yet.

Polymath: We’re looking at early next year. This is it as of now for the rest of the year.

We’ve got a small tour, in December across the UK, we’re gonna be trying out some of the stuff we’ve recorded, we hope you like it! We tried one song out today. 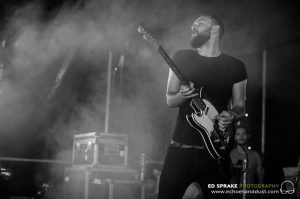 Polymath: Yeah, ‘cause you just think, is this any good? But, if people stay it might be alright. They stayed, so it must have been ok!

At this moment a chicken (one of many frequenting ArcTanGent) forced the interview to a rapid conclusion with both interviewers and interviewees enraptured in chicktagonal delight.