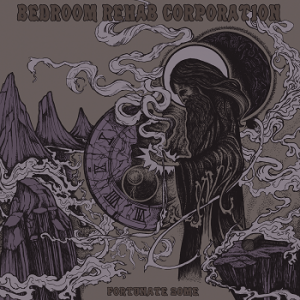 Released on October 3, 2015 via Independent

Simplicity has long been part of the appeal of the doom metal genre. Ranging from hypnotically repetitive to bludgeoning and headbangable, the slower branch of the metal family tree has long rejected the flashy acrobatics that so many of its cousins have shameless adopted, and is beloved by many specifically for the less-is-more approach it takes.

Enter Bedroom Rehab Corporation from New London, CT. This bass-and-drums duo exemplifies doom’s simplicity even more than most, and while the makeup of the group contributes to that, the band truly embraces that concept in their songwriting and musicianship. Two years following the release of their debut full-length Red Over Red and a slew of shows across the northeast US, the band has finally released a follow-up in the form of Fortunate Some, a four-song EP with very few frills and very effective songcraft.

As anyone who has seen the band live can tell you, the lack of guitar has little impact on the weight of their sound. Bassist/vocalist Adam Wujtewicz has no problem filling a room – or, in the case of a studio recording, your speakers – with his tone; while his amp and cab are simple, his pedalboard is massive and he is able to use his horde of effects to both fill out his sound and add character to his riffs. The focus is definitely kept on the riffs themselves, though, and at no point on Fortunate Some does the band go into psychedelic freakout mode with a crazy wall of trippy sounds. Drummer Meghan Killimade, to the benefit of the band, sticks mostly to simpler beats, and she is damn near metronomic in her tightness and timing. There are some bands that can benefit from bits of sloppiness here and there, but in Bedroom Rehab Corporation’s case, the rhythmic accuracy brought by a tight drummer causes the riffs to hit much harder than they might otherwise.

Bedroom Rehab Corporation’s sound is rooted in Melvins-esque grunge-influenced sludge/doom metal, but their songs are surprisingly hooky for a genre not always known for its hooks. Wujtewicz’s vocals run the gamut from a smooth baritone to evil snarls, and his more melodious lines add a great deal of catchiness to songs like the lead single ‘When All You’ve Got is a Hammer.’ The band’s overall sound is very much uniquely theirs; you shouldn’t find yourself looking for a better version of this band, because there isn’t another band that pins this sound down quite the way these two can. The territory they occupy is certainly familiar, and if you’ve wandered it before you probably won’t hear much on Fortunate Some that will surprise you, but songs are all good enough that it doesn’t matter.

It is clear in both a live and studio setting that this pair has incredible musical chemistry, and at some point this musical secret from New England will be discovered by the rest of the world. Let Fortunate Some be your much-needed introduction to the duo, because these riffs need to be heard.