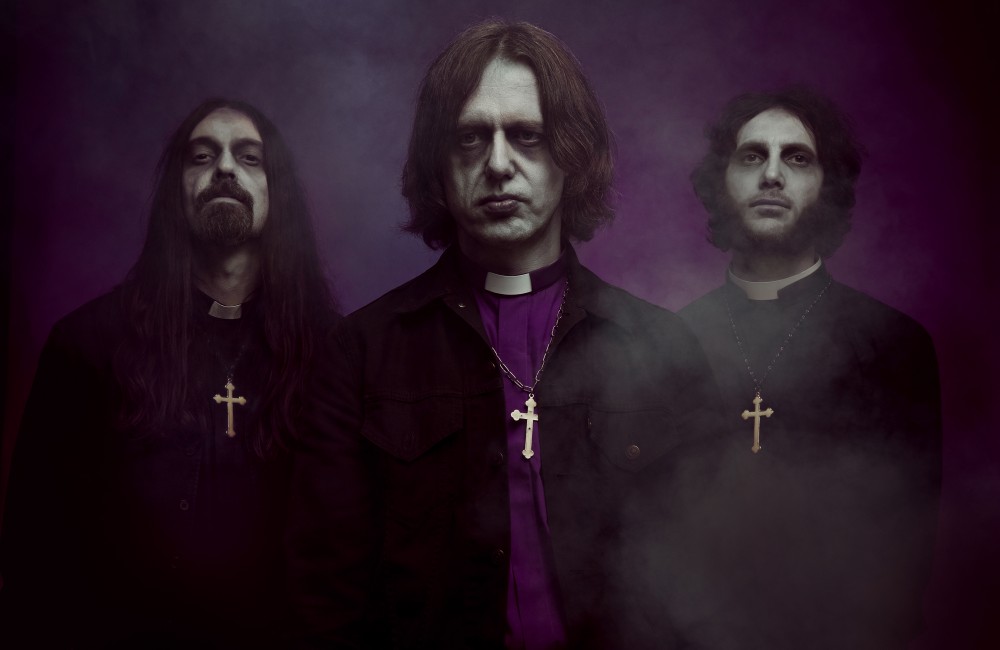 Crawling forth from the crypt, With The Dead is an unholy triumverate of elder statesmen of UK doom metal: Lee Dorrian on vocals, Mark Greening on drums, and Tim Bagshaw on guitar and bass, who have come together to exorcise demons and doom your soul.

Ahead of the release of their self-titled début album, Ross Mckendrick talked joining forces, endless riffs and everyday horror with Tim Bagshaw.

(((o))): When people found out you and Mark were back playing music together, no-one knew if you were bringing Ramesses back, working on a new band, or just jamming together as old friends. Whatever might come of it, the very thought had a lot of doom fans excited.

Obviously Mark and yourself have an extensive musical history together, stretching back through Ramesses all the way to the founding of Electric Wizard, and although it hasn’t actually been that long since you both played on a recording together (2011’s Possessed By The Rise of Magik), it’s still great to hear you back together again. What were the circumstances that led to you wanting to make music together again?

Tim: It was actually just by chance. I’ve been really busy over the last few years with Serpentine Path, releasing 2 albums and working on the new material.

So, Mark contacted me to let me know that he was out of a job again… so we talked about maybe jamming or doing something. We were going to just jam some heavy riffs with me back on bass again at first. Then Mark ran into Lee and talked about it with him. That’s basically how it started. Lee has known us both for years and was up for doing something. We all thought we would just see what would happened.

(((o))): To me, it’s always seemed like you’ve complimented each other’s playing perfectly, did it feel natural when you were back together writing and recording again?

Tim: Haha, yes, it felt pretty much the same as its always been…

(((o))): When word got out that it was shaping up to be a whole new band, with a new recording, and that Lee Dorrian would be contributing vocals, that’s when it became apparent that With The Dead was going to be something special. How was it having Lee work with you on the album?

Tim: Lee is great to work with. He likes to let things take their course naturally without making any changes to suit his vocals or anything like that… He really liked the initial song demos I sent him, which made it very easy. I think his style compliments my style very well…

(((o))): The band was formed less than a year ago, and the album was recorded barely 6 months ago. Was the writing process as fast as it seems? Did you have riffs kicking around just waiting for the right band, or were you inspired to write everything by playing with Mark again?

Tim: I am always writing songs and riffs, pretty much on a daily basis… working with Serpentine Path has been really amazing and inspiring. I actually focused my efforts and wrote most of the new songs over a period of weeks when I first started talking with Mark and Lee. But some of the With The Dead riffs have been works in process over the years. Like the track ‘Screams From My Own Grave’, which was a riff that’s been knocking about in my head for the last 10 years. I just needed the right outlet to explore some of those old ideas.

(((o))): You handle both bass and guitar duties on this record, having played both with previous bands, and the opening riff of ‘Nephthys’ alone is proof that you were more than up to the challenge. How did you find it being solely responsible for all the riffs on the album? Did it allow you more freedom than writing with another guitarist or bassist?

Tim: It was easy, since I understand the nuances of both very well. I’ve been writing for quite some time, as far back as the song ‘Stone Magnet’ on the first Electric Wizard album. If you listen to Dopethrone now, you should be able to work out which songs are mine and which aren’t.

Being the sole songwriter for Ramesses and Serpentine Path, and now With The Dead, has confirmed that I am no stranger to songwriting… Looking back now, It’s actually all really quite rewarding.

(((o))): There are no secrets regarding the acrimonious nature of Mark’s split from Electric Wizard, and their willingness to talk shit about both him and Lee in several high-profile interviews, while both of them have managed to keep a more dignified stance on the matter.

However, listening to the album, there is definitely a sense that there was a lot of anger and frustration that needed to come out. Was the situation between your bandmates and your old band a factor in your own motivation for doing the album? Or have you tried to stay removed from the whole situation?

Tim: I definitely want to stay removed from the drama. I left Electric Wizard in 2003 and haven’t really looked back. I’ve been too busy with other more important things in life to have time to get involved.

(((o))): Throughout all the bands you’ve played in there’s been steady use of horror, occult and exploitation imagery, themes and often samples. I know that Lee has always been influenced by classic horror cinema in his writing too. Did any of those type of films play a part in influencing With The Dead? Which films specifically did you draw from when creating the album?

Tim: I draw mostly from life…there is enough horror in the world to help with the creative process… But I also still enjoy all of the classic horror films as much as anyone. I’m dead, aren’t you??

(((o))): Since the demise of Cathedral a couple of years ago Lee hasn’t been a part of a touring band, and as far as I know Mark hasn’t been behind the kit on stage since his last gig with the Wizard, while you’ve played a few gigs here and there with Serpentine Path.

Even though none of you have done any extensive touring for a while, are there plans to play any live shows as With The Dead? If so, would they be special one-off appearances, or would you be up for taking the band on the road?

Tim: No plans for the future at the moment. We haven’t really spoken about the next move.

(((o))): What’s next for With The Dead? Do you see yourselves continuing what you’ve begun, or is this a one-off release?

Tim: Let’s see what happens with this release first! Haha!

(((o))): What about what’s next for yourself, Tim? Do you have anything else you’re working on at the moment? Are there plans for more Serpentine Path recordings, or perhaps even bringing that band to UK shores?

Tim: Yes to all of the above… except maybe the UK/EU touring. Working on the next Serpentine album, which is really fucking exciting. I can’t wait to get things rolling.

(((o))): Thanks for your time Tim, I’m looking forward to holding the actual record in my hands soon!