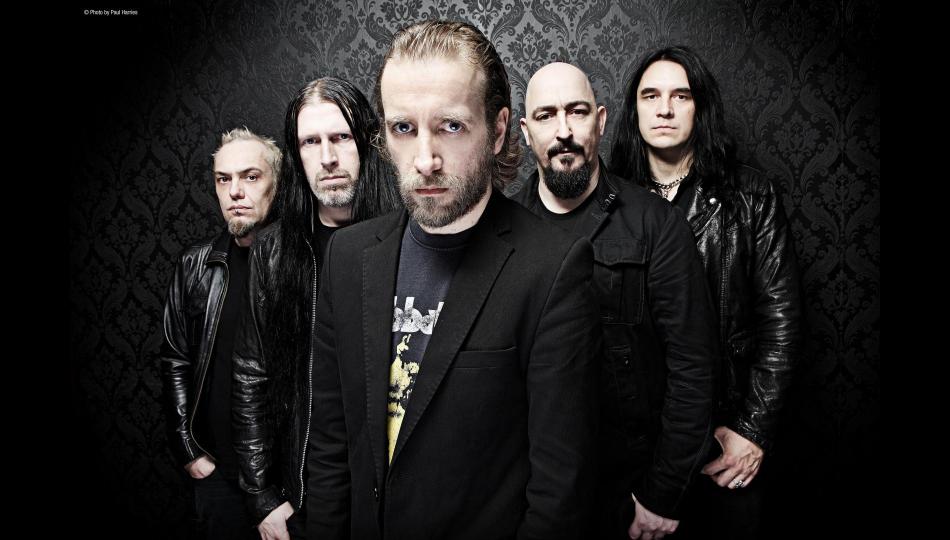 On a nice Thursday night in Glasgow a sizeable crowd showed up to The Garage to witness Paradise Lost. As the crowd began entering into the venue the first band up to start the evening were Lucifer, a new project from Cathedral’s Gaz Jennings.

Lucifer are a throwback to the 70’s with their Black Sabbath inspired doom metal. They played a set of six songs all of which were enjoyable. The highlights were ‘Purple Pyramid’ and the set closer ‘Izrael’, which finished things off strongly. The band sounded good throughout with the only issues being the vocals being lost in the mix, but this was an issue that occurred throughout the night with the other bands as well.

Tribulation were up were next and they went straight into it with no messing about. They are a dark progressive death metal band that occasionally adds in other influences. The highlights of the set were ‘Melancholia’ and ‘When the Sky turns Black’, which finished a decent set off nicely.

Paradise Lost were next and they began things with the recognisable riffs of ‘No Hope in Sight’ from the new album The Plague Within, which was featured heavily throughout the set. This was followed by ‘The Enemy’ from the In Requiem album, and then the title track of Gothic, which got things off to a strong start. They returned to the new album with Nick introducing it and saying that he hopes people like it and if they don’t fuck it before launching into ‘Terminal’ and then another title track ‘Tragic Idol’. In Requiem was represented again with ‘Praise Lamented Shade’ before returning to the new album with ‘Victim of the Past’, which was a highlight of the set. The band then fell silent as the piano introduction to ‘Enchantment’ started up to introduce the track, which was another high point in the set. They then showcased more of the new album with ‘Cry Out‘ and ‘Beneath Broken Earth’. ‘As I Die’ followed this with Nick introducing it as Paradise Lost’s ‘Smells like Teen Spirit’ and you can hear the comparisons. ‘Requiem’ closed out the set before the encore.

After a short twelve songs in the main setlist the encore included a further four songs ‘Return To The Sun’, ‘Faith Divides Us’, ‘An Eternity of Lies’ and ‘Say Just Words’, which brought an excellent night to an end. The only issues that I had with Paradise Lost were the length of the set. Surely it could have been longer with the length of career that they have had, despite that it was a good mix of new and old. The vocals again were a problem and were continually lost in the mix, but this seemed to be an issue throughout with one fan even shouting out to get the vocals turned up. Despite these minor issues Paradise Lost were excellent and I thoroughly enjoyed the night as a whole.