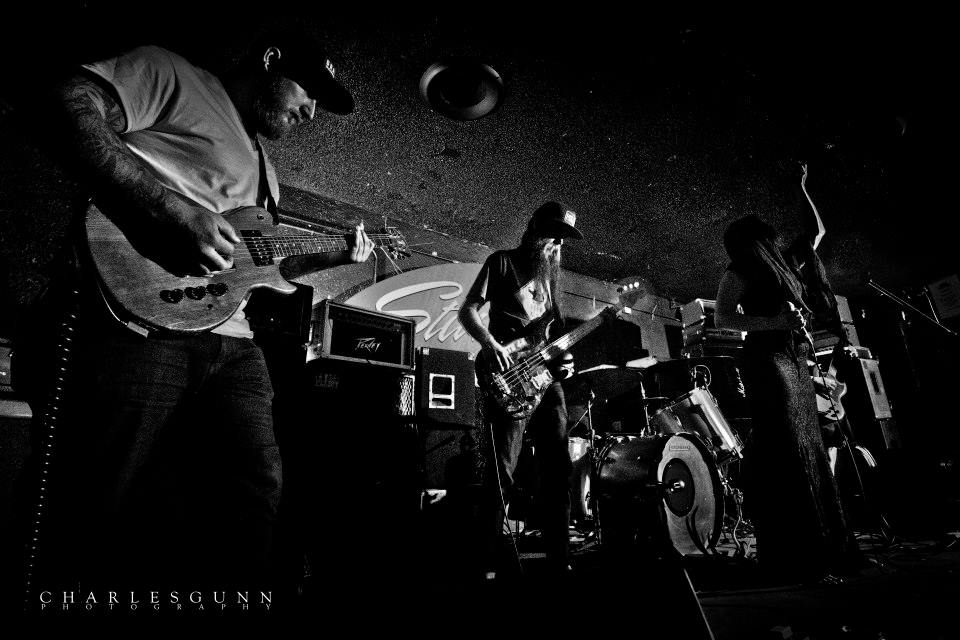 Sacramento based doom band CHRCH recently released their awesomely heavy album Unanswered Hymns, which Scott Bowden reviewed here. Scott followed this up with a short Q&A with the band asking about the band’s history, their gear and the Sacramento music scene.

(((o))): For those who haven’t heard Unanswered Hymns, or your band before, how would you describe your sound?

(((o))): When did the band form, and did you realise quite quickly that you were on to something great?

CHRCH: Early winter 2013, around December. When we were writing, we all could definitely feel the powerful resonance of what we were creating, although we weren’t confident it would completely translate to other people. It’s one thing to create something emotionally cathartic for yourself, and quite another to have that translate and be that for others.

CHRCH: Heavy music, depression, anger, substances, and the feeling of making it out alive.

CHRCH: We’ve been able to play with some of our favorite bands and biggest influences in such a short amount of time.  There is no way we thought that less than a year after our first show, we would be opening for Pentagram, Acid King, Yob, Bongripper, Ufomammut… it’s still surreal for all of us.

CHRCH: Touring, writing, playing shows. We just played with Kadavar, Dead Meadow, Black Bombaim, Goya, and a bunch more in the middle of a desert. A week tour surrounding an appearance at Midnite Communion III in Long Beach early November. Europe and full US next year, hopefully.

(((o))): Does the band exist as a release to your day to day lives? What do you guys do outside of band life?

CHRCH: Eva owns an educational company called WatzThis? Shann manages a sandwich shop called Dad’s Sandwiches.  Matt manages a computer engineering lab, Chris is a sound engineer and promoter in Sacramento, and Ben skates for a local team/shop called Subversions. We definitely use this as a release for the pressures of daily lives, though. It’s somehow calming to be able to walk into a room and create orchestrated chaos with friends.

(((o))): Can you tell us a little bit about what equipment you use live, and did you experiment quite a lot in the studio with different amps and instruments?

CHRCH: Chris uses a Sovtek Mig100h 100w all tube head through a Marshall Mode4 4×12 with Vintage30s and a Peavey Rock Master 120w all tube head through a Fender Bassman oversized 4×12 with two Cannabis Rex and two G12-h75. Shann uses a Peavey Mace 160w tube power solid state preamp through an oversized Peavey 4×12 with two Cannabis Rex and two Swamp Thangs. Ben uses a Peavey Max 800w solid state through a Peavey 1820 and two Ampeg 4x10s. Matt has a different drum set at every show and they’re all huge. We didn’t experiment with other amps too much, but our engineer does have an Orange Rockerverb that has an insane modded reverb tank that we used a lot.

(((o))): I read an article recently about the vinyl resurgence and how it affects bands who are at a lower level to a lot of the major label bands. I noticed that your album has been delayed (again) at the pressing plant. Do you think this resurgence is a problem for bands who already struggle on a day to day basis just to be something more than a local band?

CHRCH:  Yes and no. It’s great that a medium a lot of us have loved for years is making a resurgence from a collectors stand point for sure, but it is frustrating when your record and all of your friends’ records get delayed for months and months on end because Rhino Records decides to re-issue some one hit wonders back catalogue. At the same time, though, digital distribution of music is probably more important for global reach than vinyl. It’s awesome having a big piece of musical art that you can look at, but right now, folks who have heard us all around the world have done so via Bandcamp for the most part, since our LP isn’t out and we’ve only had a small run of tapes to sell.

(((o))): There is already a great buzz around you guys, which is amazing considering your relatively short lifespan. Do you find your local Sacramento scene very supportive of what you do?

CHRCH: Absolutely. I think this is the first band any of us have been in that has received this much support from our local scene right off the bat.

(((o))): What’s it like coming from the Sacramento scene? From an outsider’s perspective, some of the bigger bands from that area have a very specific sound and style. Is that sound still prevalent today? Can you recommend any great bands to listen to that will shatter that perception?

CHRCH: I’m assuming you’re referring to bands like Deftones, but that shit is so irrelevant in our local scene anymore. Will Haven are the only band that even resembles that kind of stuff anymore, and even their new stuff is a lot more fucked up and heavy. Noisey/Vice actually just had an article about the Sacramento scene called “Sacramento’s metal scene is keeping it dark in the Golden State.” It featured a lot of cool bands, including Will Haven, but also bands like Battle Hag, Modraniht, Peace Killers, and Bog Oak. There’s also Waning and Cura Cochino. And outside of metal, there’s a lot of awesome and interesting bands doing cool shit. Check out So Stressed, Dad?, Little Tents, Rad, Cross Class. Sacramento has always had a lot of really good bands.

(((o))): Do you have any parting words which you would like to say?

CHRCH: To the dejected and despondent, may you retrieve your golden light.