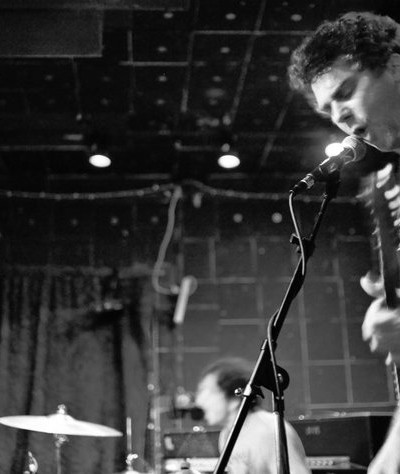 When our writer Richard Collins isn’t smashing out reviews for us, he spends some of his time putting on gigs with his mate Lins at a night called Cosmic Carnage. When he’s not doing that he can often be found talking complete bollocks, we have decided to capture some of this bollocks and call it the ‘Cosmic Roundup of 2015′. He’s caught up with shit loads of our favourite people from across the scene and we’ll be publishing one every day until we run out… like some sort of crazy ass advent calendar!

We’ve never quite recovered from the time when Portland based noise rockers, Rabbits destroyed the Brixton Windmill at a Cosmic Carnage night. The front man, Josh Hughes also runs a label called Eolian Empire, which pumps out some of the most innovative heavy bands we’ve ever heard.

JH: I’m well. I’m actually in Europe right now, visiting Kjetil from Arabrot at his place in the Swedish countryside. Hanging out and recording a bit of music in the church.

CC: Rabbits didn’t record or release anything this year. Any reason for that?

JH: Not true! We released a split LP with our friends Gaytheist called GAY*BITS: https://digital.goodtodierecords.com/album/gay-bits

(CC: We meant ‘didn’t record or release an album’ but it was the most poorly phrased question ever)

CC: Are you releasing an album next year?

JH: Probably not a new album, but we are going to release a video of our live 10th anniversary show from July 1st. We played at our favorite venue in Portland, The Know, and filmed it with four cameras and recorded to ProTools so we could mix later. Looking forward to the release as we’ve always considered ourselves a live band first, studio band second.

CC: Tell us more about Eolian Empire records, when did you start it?

JH: Eolian was started in 2005 by our friend Daniel (the fourth Rabbit) to put out the first Rabbits/Under Mountain split 12-inch. Daniel moved away a few years later, and we restarted the label–with his blessing–to put out a bunch of Portland bands we think are some of the best bands around, doing really interesting variations on heavy, noisy rock.

CC: What qualities do you need to be an Eolian Empire band?

JH: It’s important for us to have a close relationship with the bands, and we’re not interested in bands doing the same old stuff, no matter how good at it they might be. The “heavy/noisy/weird” tag for us is really a badge of honor. We want to represent an underrepresented cross-section of bands that don’t fit squarely into the generic heavy rock scenes.

CC: Tell us more about the scene in Portland, it is has an amazing reputation for creativity in rock music? Does it actually live up to it?

JH: Portland is really a bunch of interrelated and overlapping scenes. There are plenty of shit bands here, but I also think there are some of the best bands in the world right now that call Portland home. Many a time I will go see a show with a superhyped out of town band and the Portland openers blow them off the stage as far as I’m concerned. There is definitely a “lifer” mentality here that is crucial to the scene. Plenty of supremely talented musicians, lots in their 30s and 40s, live here and continue to play really challenging music regardless of how noncommercial it is, and people are really supportive of one another’s bands. People have very eclectic taste, so we have all sorts of bands and fans. I discover new bands and meet new people on a regular basis.

JH: I’m always a little behind on new albums. Not new, but I listened to the Feedtime box set on Sub Pop for probably a month straight earlier this year. I also really dig the latest Elephant Rifle and DEAD LPs.

JH: The best gig for Rabbits was most definitely our 10th anniversay show at The Know in Portland in July. We played songs from our whole back catalog and all our old friends and original supporters came out. It was packed, hot, sweaty, and drunk as hell.

JH: Arabrot played in Portland earlier this year and blew me and everyone else there away. Top gig. DEAD from Australia also came through town and killed it. Honorable mentioned to The Cuntz (AUS), Spray Paint (Austin, TX), and Knelt Rote (Portland).

The best (anti-)festival was Festicide that I helped put on. 30 Portland bands at 9 venues over 3 days, all shows $5 or free. It really was a blast and showcased the variety of bands happening in Portland right now.