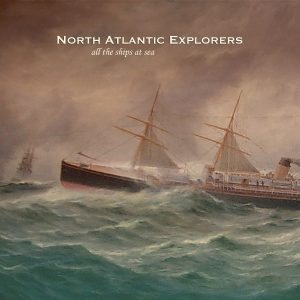 All The Ships At Sea is the new atmospheric instrumental album from Vancouver’s North Atlantic Explorers. The band is lead by Glenn D’Cruze, who started his musical way as a drummer for several groups and has recently decided to find his own music way. Each melody is titled for a ship Glenn’s father sailed on with the British Merchant Marines during the 1950’s.

The album is a collection of 1.5-3 min long musical soundcapes, composed and played by Glenn on electronic organ with a bunch of featured artists. The collection of 13 tracks lasts hardy more than 45 min in total but without doubt leaves one with the desire to replay and replay it. New age sounding ‘Martaban’ and ‘Renfrew’ give a start to the musical sail with a quiet and tranquil mood which alludes to calm seas. Electronic ‘Yarborough’ flows down taking you far from the shore. With neo-classy ‘Dunmore’ it feels like a sunrise at the open sea.

‘Cape Nelson’ is a bit exuding from the tracklist with electronic sounds and vivid beats. It sounds like the ship moored in a crowdy and always noisy port. At the opposite extreme comes the other completely organ-based track ‘Saint Aidan’ with no rhythm section at all. This mellow and inspirational track remains of birds flying over the sea.

‘Agate’, a short interlude right in the middle of the album, inaugurates a new sail coming. A drop of light sadness sounds in the next track ‘Sapphire’ – it is a pity to leave the habitual but the joy of new destination at the same time. ‘Sheldrake’ is a jazzy theme which seems perfect description of nighttime sea, deep of darkness and unknown but non-stormy and ‘sleeping’.
‘Lapwing’ starts with ribbed sea surface turning into some northern indie sounding melody. And if the previous tracks were very relaxing and light, this one certainly has power and captivation of guitar riffs and drum beat. This was a hard day and the evening comes out in the next ‘Ptarmigan’, subdued and softened with keyboards and cymbals. Pasty ambient ‘Petrel’ finishes the other journey. Epilogue comes with ‘Sailing By’, the well-known musical accompaniment to BBC Radio’s late night shipping forecast.

Heritage and family as source of music inspiration are not new to North Atlantic Explorers. The album came out just 360 days after the previous work My Father Was a Sailor’ also marine-inspired. Highfive if after a couple of listens to you start planning the other trip to the sea.