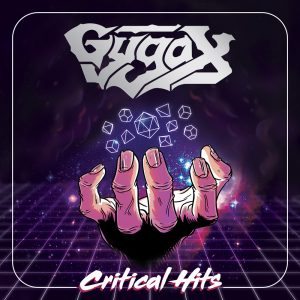 Released on January 22, 2016 via Creator-Destructor Records

With a lucky roll of the 12-sided die the new Gygax album appeared in my inbox awaiting my ever attentive review. Gygax, the new band from Gypsyhawk master-mind Eric Harris, is the Dungeons and Dragons inspired band built out of the ashes of Harris’ former band. The name Gygax comes from the co-creator of the fantasy game and as a music reviewer, I never knew I would have to do so much research on D & D or the guy who helped create the game. The things one has to do to write a proper review! Now, there really isn’t enough time to delve deep into the D & D realm as it has become so massive over the years that it would be a second occupation for me to really be able to understand it all. But as I have come to find out it really doesn’t matter how much you know of the game; if you like heavy rock and roll you should really like this album. It is a groovy, RIFF-tastic gem from the first song to the last.

One thing Harris has always been able to do is make a song that when the first note hits, your head is already bobbing to the rhythm and doesn’t stop until the final note of the final song. This is what happens with Critical Hits. The opening song, ‘Lesser Magick’ opens with a riff that when it so catchy that before you even realize it you are hooked, no turning back! All of the songs on this album are pleasantly very fresh and thankfully Mr. Harris has brought with him the passion and creativity he showed while fronting Gypsyhawk. Sure, there will always be a bit of Thin Lizzy love coming from an Eric Harris band but he and the band have absolutely found their own sound on this album while not forgetting from where it once came.

The true beauty of this album is that all of the songs are memorable and well executed and the band actually sound like they have been playing together for a long time. A prime example being the song ‘World Breaker’, a mid-paced gem starting with a wicked riff and moving into a solid groove led by drummer Justin Dempsey. But really all of the songs are superb and the production is just dirty enough to help keep that retro label but, the pacing of this album is also quite well thought out. Midway through the album comes a short instrumental break ‘Dirge for a Disposed Duke’ and with the song being only 1:07 it is the perfect break and just adds to the overall significance of the album and how well this album is put together. In addition, it is a wonderful way to keep the atmosphere of the inspirational material

I can honestly say that I have not one bad thing to say about this album with the exception that they made me care more about D & D than I ever thought I would…I kid because I care. But the reality is that this is a really great album regardless of what you know or even think about fantasy games. With solid song structures and an endless amount of pure riffs and groove Gygax have fashioned an album that should be enjoyed by all who love their music heavy, dirty and with a bit of a tale to tell. I loved Gypsyhawk as a band and was supremely disappointed that they are no longer but thankfully Mr. Harris took what Gypsyhawk was and turned it up to 11!