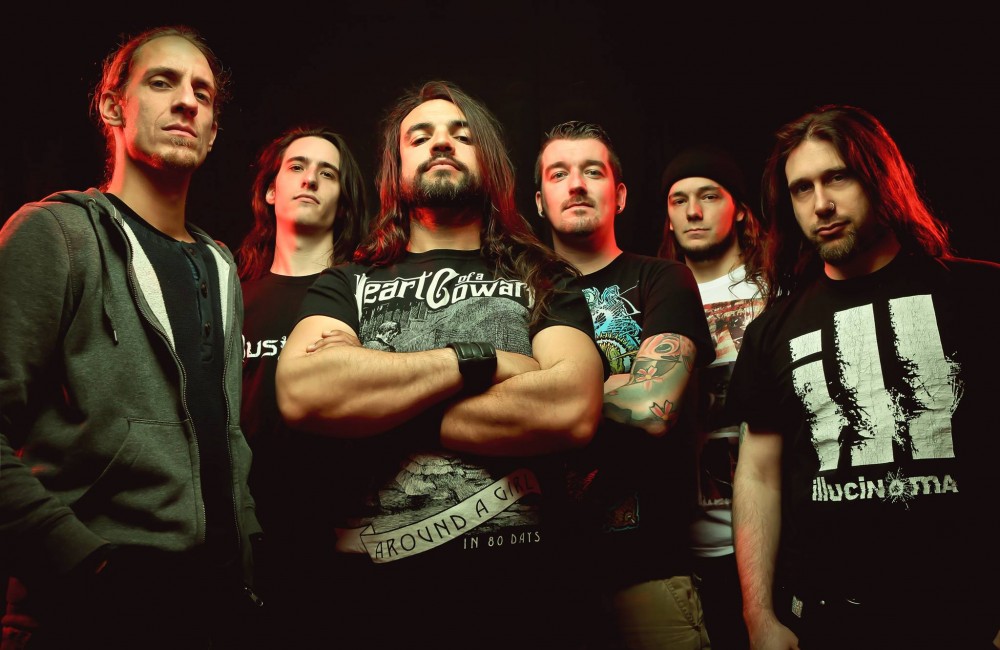 After a five year absence Dutch experimental metal outfit Textures are back with a vengeance. Despite losing a key member the band hasn’t lost a beat on their latest effort, entitled Phenotype (read our review here). Raymond Westland caught up with vocalist Daniël de Jongh to discuss the new album, losing a key member and what it takes to be a member in Textures.

(((o))): There’s a five year gap between Dualism and the new record. What happened?

Daniël: Well, we did a lot of touring in support of Dualism. Another major event was Jochem [Jacobs; former guitar player] leaving the band. He was a founding member and a major contributor, so finding a suitable replacement was quite a daunting task in itself. After a lengthy audition process we recruited Joe Tal as our new guitarist. Afterwards we started writing new material. However, we also had the ten year Polars anniversary tour coming up. When that tour wrapped up we started working in earnest on what has become Phenotype. So yes, that’s basically what we’ve done in a nutshell.

(((o))): Can you elaborate on the Polars ten year anniversary tour? How did that influence the writing process for Phenotype?

Daniël: The tour was really a blast. Truth be told a lot of the Polars material has never been played by the current Textures incarnation, so reconnecting with the band’s past material was a great experience in itself. Playing the Polars material wasn’t as much a source of inspiration for Phenotype as such. Having that said we intentionally incorporated certain elements of our past records on Phenotype. A lot people asked us to write some heavier tunes in the vein of Drawing Circles and Polars again. We also aimed for the groove aspect of Silhouettes combined with our trademark “out there” approach. All those elements ended up on Phenotype. Joe Tal said that he wanted to bring back the extreme metal element in our sound. I feel we’ve managed to do just that on the new record.

(((o))): You really managed to showcase your versatility as a vocalist on the new album. How was the whole recording experience for you?

Daniël: When Uri [Dijk; keyboards] and I joined Textures prior to the recording of Dualism half the material was written already. So we really didn’t had the chance to put our mark on said album. With Phenotype we all started fresh, so we’ll all got the opportunity to contribute and have our say on how the material turned out. That was really inspiring. We’re also much tighter as a band on both a musical and personal level and this really shines through on the new album in my opinion. Phenotype is a genuine team effort.

(((o))): Phenotype is instantly recognisable as a Textures record, but it also contains a surprising amount of lead guitar. That’s quite new for the band…

Daniël: That’s true (laughs). There’s some leadwork on Polars though, courtesy of our former guitarist Jochem. He also doubled as a producer on our past Textures records, so he didn’t write as much as he did in the past. It was all about creating a certain atmosphere, so including lead guitar wasn’t such a priority. With Joe and Uri in the band we have two very capable musicians who can hold their own when it comes down to playing solos. Joe comes from a jazz background, so he really knows his stuff. When you have such great musicians in a band, it would be a crying shame not to utilise their talents. Uri also contributed a lot more to Phenotype. It really adds to the overall diversity of the album.

(((o))): You mentioned it before, finding a suitable replacement for Jochem was quite a daunting task. How did the addition of Joe Tal influence the overall creative dynamic within the band?

Daniël: In the end Jochem was pretty much done with his role in Textures. He didn’t contribute that much anymore and he was really busy producing other bands. When he announced his departure we really asked ourselves whether we wanted to continue as a band. I mean, he played such a pivotal role and he was one of the founding members. However, we still felt we had a lot to say, so we decided to soldier on. After a lengthy audition process it turned out that Joe was the right man for the job. We already knew him as a player and after our first jam session together that he was our man. Actually, we got response from one hundred guitar players from as far away as the US, India and Canada. Even a member from Annihilator responded. Everyone knew their stuff, but we finally decided it would be more practical to have a Dutch guy coming in. After all, we’re a Dutch band and for all intents and purposes Textures isn’t a full time gig. We all have full time jobs to sustain ourselves and our respective families (laughs).

(((o))): So what did he contribute to Phenotype when it comes to song writing?

Daniël: He actually wrote almost halve the material. ‘The Fourth Prime’ and ‘Shaping A Grain Of Sand’ are his compositions amongst others. Irony has it that he’s responsible for the old school Textures feel on Phenotype (laughs).

(((o))): Phenotype is actually part one of a two album package. What can we expect from Genotype, which will see the light of day next year?

Daniël: Phenotype is very much a record in the traditional sense of the word. It’s basically a selection of songs put together on a single album. Genotype, however, is a single 45 minute composition. It’s a really proggy album with tons of dynamics and contrasts. Musically, both records are connected, but Genotype is a record in his own right as well. I’m really excited about it. The material showcases our more experimental side.

(((o))): Textures has its fair share of line-up changes. What are your thoughts on that?

Daniël: It’s a necessary evil. It’s a phenomenon most long running bands like us have to deal with. Life has a habit of coming in between. People change and evolve over time, so it becomes inevitable that members lose interest playing in a band. It takes a lot of time and dedication being in a band like Textures. When you incorporate new players in a band it’s quite a challenge to protect the essence of what this band is all about. Luckily, Stef Broks [drums] and Bart Hennephof [guitars] are still in Textures. They act as the custodians of what this band is all about (laughs).

(((o))): It’s often said that a record is a snapshot of what a band is all about within a certain time frame. So where are you guys standing as a band at this point in time?

Daniël: That’s a great question. We really wanted to give our all as a band and I feel that really shows on our new record. It may sound cheesy, but we really wanted to challenge ourselves as musicians. In many ways Phenotype marks the rebirth of Textures as a band and it’s also a new chapter in the band’s ongoing history. It encompasses all the things we’ve done before. On a personal level we’re a very tight unit. It feels really good to be a part of this band.