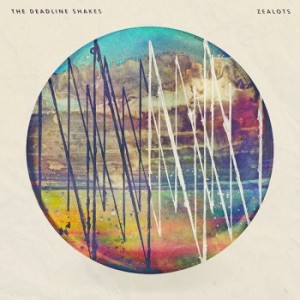 Released on November 29, 2015 via Flowers in the Dustbin

An antidote to the winter blues, Zealots, the debut release by Glasgow band The Deadine Shakes, offers a glimmer of vibrant colour in the coldness. Opener ‘Bright Spot in a Bad Year’ begins with a soothing Midlake-tinged mandolin, before being joined quickly by guitars and vocals as the song swells into action. There’s a change in pace driven by Thomas Booth’s pounding bass drum as Greg Dingwall’s keys tinkle gently, male and female voices harmonising about how certain things would have gone down in the 90s. Pretty well, if this is anything to go by. “I wake up in the morning with my limbs intact / I don’t have any money so I don’t get taxed,” sings Dingwall on the chorus, providing a bit of political punch.

Throughout, The Deadline Shakes touch on a few markers. There’s plenty of Field Music, there is also a healthy dose of Gulliemots in here. The music is approachable and upbeat, plenty of depth, but easy on the ear: there’s not a lot of work required of the listener beyond foot tapping and joining in with some of the infectious choruses, such as that on ’Shelters’.
It’s difficult to throw a genre on Zealots – alt-folk, aye; alt-country, most definitely; pop, yup. It’s the sound of a band unwilling to squeeze themselves into a box, and that’s always refreshing to hear. The fact each of the seven members is a multi-instrumentalist is understandable from the first listen.
For example, strings and piano lead ‘Slipping From Your Heart’. Dingwall’s vocal shines here, sounding sadder than before, approaching Neil Hannon levels of playfulness. “Holding on, together forever… I can feel I’m slipping from your heart,” illustrates a huge shift in narrative tone (and musical key) during a chorus lifted by a gorgeous guitar lick at its end. It’s clever stuff. What’s more, there’s a richness to the track that has all the hallmarks of big production, but when you take into account that it was produced by Dingwall in his bedroom, the sound is all the more impressive.
There’s a minor derailment on the sub-minute ‘When Will I Ever Learn’, which sees Kiera Pollock’s winsome voice packed with emotion, but it’s over before it gets anywhere, the sort of half song that a stricter producer may have convinced the band to cut. Has any single minute song other than ‘Elizabeth My Dear’ ever worked? A second, more country-tinged sub-minute number comes later, and despite some lovely harmonies, it also seems a touch lost, particularly with the hugely upbeat intro to ‘Sweeten the Deal’, which follows it. As chief songwriter, Dingwall maintains his theme of lovelorn hopelessness: “I’m lonely and desperate / how can you resist that? / how can I sweeten the deal anymore?”. Drums roll in, guitars are at their most screeching, Pollock and Dingwall harmonising perfectly; it’s the epitome of a great pop-folk song.
And that’s the way The Deadline Shakes leave you feeling throughout – Zealots is an album of strong musicianship, heartfelt lyrics to match swooning vocals. With 13 tracks packed into 42 minutes, there are a couple that perhaps could have been dropped, but this is mere nitpicking. This is a solid, confident debut, one that ends brightly on the soaring ‘Boy’, which again brings Field Music to mind.
There’s been a lot of local radio support for the band, but with a host of festival performances lined up this year, there’s a fair chance that airplay will become more widespread – it certainly deserves to be.