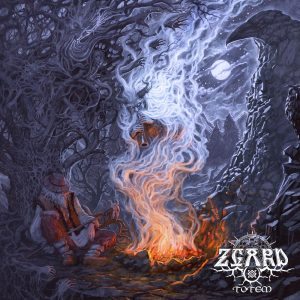 Zgard is a one man metal band formed in 2010 by Yaromisl. Totem is the fifth album that he has recorded. It is atmospheric black metal with Carpathian folklore concepts. It also features instruments such as the sopilka (flute) and the drymba (mouth harp), which are native instruments of the Hutsul peoples of the Carpathian Mountains.

The album begins with ‘Dismal Visions’, which is an almost three minute long atmospheric track with choral chanting and the sound of fire crackling away. ‘Land of Legends’ instantly speeds things up as it begins frantically. It slows slightly as the vocals come in around the two minute mark. This is followed by the sopilka being added to the mix as it speeds up again. It never lets up after that as it works its way to a conclusion.

This pace is continued as the next track ‘Descendants of the Thunder’ begins. As well as the blackened vocals we get choral chanting throughout the opening five minutes of the track. The song then breaks down with female vocals coming in along with atmospheric effects. The track then builds back up to conclude the track. ‘Totem’ is next and is very similar in structure to the previous track until its conclusion, where the sopilka is brought back followed by tortured black metal screams to close it out.

‘Sorrow’ begins very differently to the previous tracks with an acoustic opening. It is slower as well and brings a sense of doom to proceedings. As it progresses the vocals are interspersed with screams and different instrumentation. The track then breaks down with the acoustic guitar brought back along with speech in the background. Things start up again as it builds to an excellent conclusion.

‘Sorrow’ breaks up the album nicely as the following three songs are similar in structure to what went before. It begins to feel repetitive as the album continues on and it could have been varied a bit more in structure and could have cut down the length of some of the tracks. Despite these issues it is a good album that is worth listening to due to the strong folk elements that feature in the music.