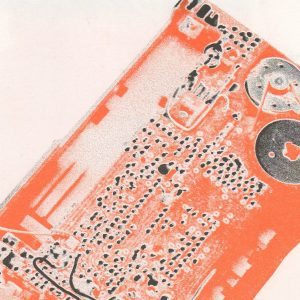 Fingers in the Gloss is the first solo album by sound artist Lisa Busby, is a sometimes uneasy but always gripping mixture of music/songs and cryptic sound collages/noise. Busby is best known as a member of various musical improvisation groups such as Rutger Hauser and Sleeps In Oysters, but this album strips experimental music to its core, consisting often of the barest of textures and Busby’s voice, which is alternately fragile and indomitable.

The album begins with its most orthodox pieces, ‘Fingers In The Gloss’ and ‘Hollow Blown Egg’, both of which are identifiably songs, although (intentionally) disjointed and dreamlike in their use of repetitive and glitchy electronic fragments as background to the vocals. The combination of the familiar-yet-alien music with the cool, measured tones of Busby’s voice is extremely potent and listenable and should have an appeal well beyond the audience that the description ‘sound artist’ suggests.

After the musicality of the first couple of tracks the album becomes more opaque. The spoken word narrative and whining noises of ‘Cavity’ has an unsettling quality that makes every word and sound feel loaded with significance, while remaining enigmatic and ultimately unenlightening. Later tracks, such as the brutally edited, discordant ‘Bells’, ominously hushed but ear-bothering ‘Little Axewielder’ and rough ambient textures of ‘Fleeting Video Screen’ are even more inscrutable. In the end though it feels as though Busby is far more interested in provoking thought and feeling than offering any kind of answers, or indeed ‘entertainment’ as such and on that level Fingers In The Gloss is extremely successful.

The first line of this review may tell you whether this album is for you or not, but listen anyway; it may not be clear what, if anything, Lisa Busby is trying to communicate with Fingers In The Gloss, but it may well keep you coming back to scrutinize its depths.