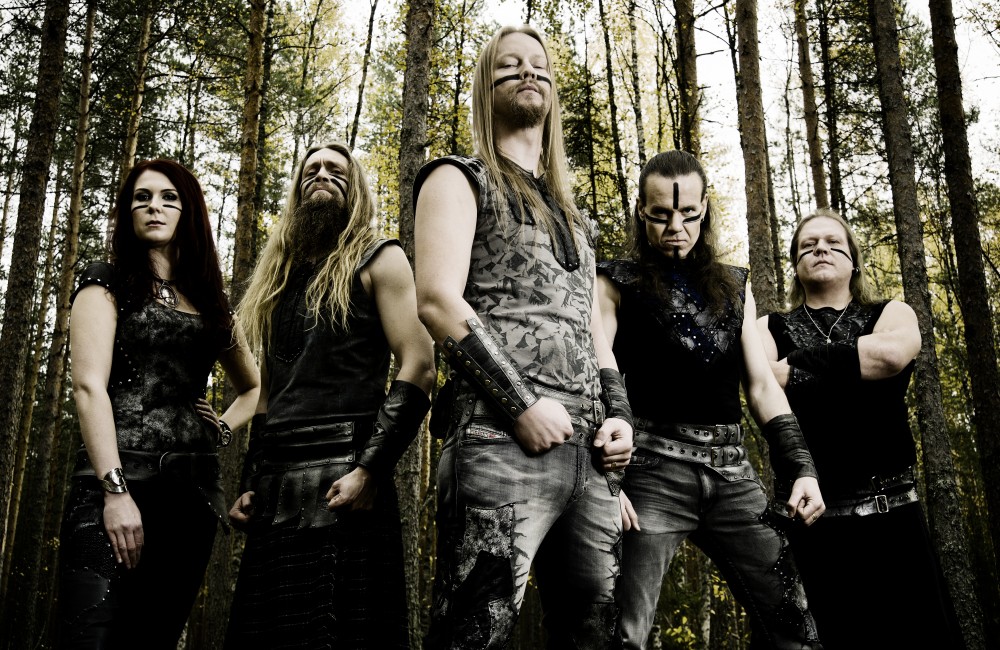 On February 23rd before Ensiferum played at The Classic Grand in Glasgow, David Higgins got the chance to have a chat with bassist/vocalist Sami Hinkka from the band.

Sami: So far so good. It’s a lot of fun with crazy crowds and sharing the bus with our old friends Metsatöll. It’s almost like vacation.

(((o))): So what can you tell us about Metsatöll, they’re Estonian is that correct?

Sami: Yes they are. Old band also and they are really good. They are more folkier than us in a live situation. You should check them out.

(((o))): I saw you last year in London with Insomnium and Omnium Gatherum, how was that tour?

Sami: It was a great tour, I did not know the other guys in either band earlier. It was one of the best tours we ever done. It was a really good line-up. All the bands were a little different in a good way. It draws a new audience and we got a lot of feedback. Many people had never seen us live, but had seen Insomnium and of course our fans get an introduction to Insomnium and Omnium Gatherum also. I really like that kind of line-up. Of course it is very different from this UK tour where Metsatöll were planning to tour here so why not do it together. In April we are doing a European tour with Fleshgod Apocalypse, which is different from our music and again it will draw a different audience to see Ensiferum. I really like that kind of tour.

(((o))): There is a big metal scene in Finland, is there any competition or are you all just good friends?

Sami: We are good friends and I have never heard from any band that there is competition. I like that all the folk metal bands, like us, Korpiklaani, Finntroll, Moonsorrow and Turisas, we are all friends together. Wintersun also with Jari our ex-singer who we are still really good friends with and we even sang backing vocals for them and Finntroll also. I really like that no one has any ego and why should we, we are just a bunch of hippies making music.

(((o))): During the live shows last year I rather enjoyed the Finnish humppa that you did in London, are you doing these on this tour?

Sami: It depends, stuff like that we don’t really plan that much. We have Netta replacing Emmi. Netta playing the accordion of course that gives her the freedom to move about the stage. She is an excellent musician so if we have any problems we can ask her to play something and she can just come up with weird stuff or funny stuff. That is good as the show must go on even if there is problems or whatever, but we do not plan that sort of stuff it is all to do with the interaction with the crowd.

(((o))): What sort of themes would you say Ensiferum cover? Fantasy and heroic folk lore?

Sami: Both. I would say the heroic aspect is really important in our music. So heroic folk metal sounds really good.

(((o))): What would you say about the reception of One Man Army?

Sami: The feedback was incredibly positive. Ever since the first show since the album had come out, people were really into the new songs and singing along. That was something new as it usually takes a tour or two for people to get emotionally attached to the new songs. With One Man Army people went really crazy over it and it felt really good. I really hope we get the same kind of feedback with the new album as we are working on new songs. The plan is to hit the studio early next year. This depends on so many things as we are still touring.

Sami: When we make an album we want each song to be important so there is no fillers. Also every song needs to sound unique so someone is not going “oh I heard this two songs ago, skip”. That is the beauty of Ensiferum, if you listen to the first song ‘Axe of Judgement’ then hear the last song ‘Neito Pohjolan’, it is hard to believe it is the same band, but we got away with it.

(((o))): ‘Two of Spades’ is certainly different. Where did the inspiration for that come from?

Sami: That is a good question I cannot remember where the disco thing came from. We probably had a break and were just jamming probably me and Janne start to this groovy thing that sounds good and just keep it. I really like that mentality that if something sounds good we keep it and don’t paint ourselves into a corner that we can only do this kind of music, we can only have these topics in lyrics. Of course Ensiferum will never sing about airplanes or coffee machines, we will always have our medieval, fantasy, battle, Viking, heroic theme. That is where we stand. Music wise though we want to try interesting things. If it sounds good we are going to keep it. I really like that mentality because that way creating new songs is more interesting for us as musicians. So for example if we can only do death metal we cannot go outside that box. Don’t get me wrong if AC/DC did disco it would be weird. For AC/DC their thing works, but for Ensiferum personally I think that would be suffocating for us.

Sami: Exactly. I have a few books back home of national epics from around the world and myths and folklores. I really would like to have more time to read, but as much as I have there is certain kinds of stereotypes and characters of heroes and anti-heroes pretty much in every culture. I also think that is one aspect why so many people around the world from different countries and cultures find it easy to relate to our music. Even though people label us as a Viking metal band, which in a way is wrong as we only have a couple of songs that have something to do with Vikings, we have songs about Western heroes but we aren’t Western metal. I have no problem being labelled as a Viking metal band as it is understandable because of where we come from.