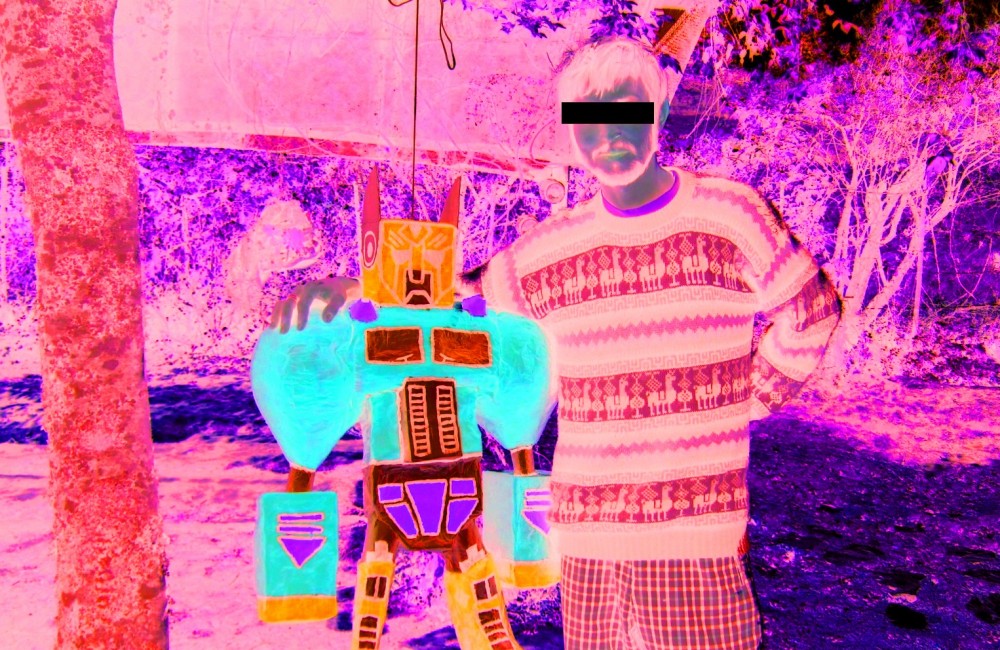 Rebelling against the conventions of Hell is no easy task, but Demons from the Dungeon Dimension have taken it upon themselves to dispel the caldron of lies and oppression that has been spread through the “individualist” and “satanic” metal scene. With their debut album, As the Crow Flies, soon set to be unleashed upon the world, Grayson Hale sat down with the project’s anonymous multi-instrumentalist to discuss its conception and recording process, among other things.

DFTDD: Well, originally I’m from an area called Magoebaskloof in the Limpopo Province of Northern South Africa near Zimbabwe. Now I live in a rural area west of Durban in KwaZulu Natal, South Africa. Although in-between this I’ve lived in Johannesburg, Melbourne in Australia, Santiago in Chile and even Grahamstown in South Africa’s Eastern Cape.

(((o))): Would you mind taking us through the recording process [of debut album As the Crow Flies] a bit?

DFTDD: Well, it’s as basic as it gets… Essentially I borrowed a friend’s amp which had an overdrive button on it to record the guitar riffs. I just put a mic in front of the amp and plugged it straight into the pink socket at the back of my computer and recorded it using Audacity. Then I sang into that same mic to record the vocals. Finally I set up a drum kit and put the mic in front of that and tried to hit the drums in time to the riffs. Unfortunately I couldn’t get hold of a bass, so there’s actually no bass on the album.

It’s a really, really unprofessional way to go about making an album – especially a metal album – but that was all I had to work with.

(((o))): Don’t take this the wrong way, but the one thing I noticed is that your aesthetic and genre descriptions bring to mind something a lot heavier than what is actually presented on the record. Would you put this down to simply being your style or are there certain things (e.g. production issues) limiting your artistic vision?

DFTDD: Well, I guess it’s a bit of both. I don’t really scream or growl, and very rarely do I intend to do anything like that. So from that perspective I guess it’s just my style.

On the other hand, I think the drumming and lack of bass really limit the record from becoming properly “heavy”. I would have loved to have a proper drummer do the drum parts so that there could be some faster beats, mad fills, even some blast beats here or there. I just don’t have the chops to crank that sort of stuff out. I love death metal and black metal, and I would love to have a drummer who could throw down beats akin to those of David McGraw. I reckon that a drummer like that would beef up the music and really define it as “heavy”.

Also, I really wanted to do some bass to thicken up that low end to get that “heavy” feel that bands like Electric Wizard manage to get, even though they use clean vocals and basic drumming.

But regardless of all this, I’m still happy with the way it turned out and I’ll stand by it.

(((o))): The title track has a noticeably black metal flavour to it that really stands out in the context of the album. Could you tell us a little bit more about that?

DFTDD: Well, believe it or not, when I started throwing together riffs to try and put together a metal album, my intentions were to do the traditional one man black metal project. So the title track was the first one I wrote. Then as I wrote that song it ended up going in a weird shoegazey direction. After that all the riffs I was coming up with had a much more “traditional” or “classic” doom / protometal feel to them. Instead of trying to force out some more black metal I just hung onto the riffs that felt good and natural and developed them into songs.

DFTDD: I suppose all manner of things inspires my music. It’s really hard to say. I’ve been playing some very different styles of music for a very long time now. When I was a kid I always preferred playing my guitar to doing just about anything else. It’s really comforting to write your own music. It helps you get to know yourself and discover who you really are. Often, I don’t actually know my own honest opinion of something until I start writing a song about it and I see where it goes.

With this album I definitely wanted to write heavier electric music, and I actually surprised myself at what an angry person I really am. In person I’m usually a very relaxed, docile and mellow kind of guy. When I started writing these songs for some reason the music forced me to stare into a part of myself I didn’t really like. I ended up confronting these more undesirable dimensions of my personality in this music. It wasn’t the intention, but it was where the music took me.

I don’t know if that’s the inspiration behind it, but that’s definitely how my process works.

(((o))): What is the metal scene like in South Africa? What kind of community exists for the kind of music you are playing?

DFTDD: I’ll be honest with you – I’m not really that knowledgeable on SA’s existing metal scene. Every city has its own thing going on and I’m not at all involved. But I do know that there are some really great SA metal bands. For cleaner, proggy or djent type stuff you should check out Riddlebreak, and for death metal Vulvodynia are simply incredible. Both of them have a pretty big following.

Sadly, from a doom point of view there isn’t too much happening. After endless weeks of research and trying to contact people I’ve only managed to trace about six other SA doom bands; both active and broken up. There’s a pretty heavy doom band from Johannesburg called Corax, and one from Cape Town called Doomorgy. I’m really interested to find out more about another one from Joburg called Mad God. I’ve heard good things about them.

But I’ve been trying to contact people who are active in the SA metal scene, like Metal4Africa, and hopefully DFTDD can become a bit more involved. I’m seriously looking to put together a live band so we can play some gigs.

(((o))): The one thing I really loved about the album is the way everything transitions and progresses so naturally. It’s really well put-together and feels like a cohesive whole, as opposed to just a collection of songs. How do you feel about the current state of the album format, as opposed to the modern trend towards streaming services which seem to be promoting the idea of the single song as the product?

DFTDD: That is a huge compliment for me, and I thank you kindly for it! Well, I love albums. I’ve only ever really listened to albums as a whole. I never was one of the cool kids who got mix CDs from friends when I was at school, and as a result I just listened to the few albums I had, and my parents’ collection. I know this is super elitist of me, but I don’t think most of the people claiming to be Tom Waits fans really know Tom Waits, because to me, every album of his tells a tale and has a certain feel which is unique to that record. I just feel like to know Tom Waits you need to know his records the way he intended them to be known. Too many people say stuff like “yeah man I love the songs Goin’ Out West and Big In Japan”, and that’s literally all they know by the guy and they consider themselves massive fans.

I also find that with doom or protometal it’s really important that the album is a cohesive piece of music. Think of bands like Sleep, Electric Wizard, YOB, Sunn O))), etc… You don’t just put on one track! You sit there and listen to the whole record. It’s like a ritualistic, meditative experience. It’s one of the best things about doom. The same goes for those older bands like King Crimson and Led Zeppelin.

But you know, at the end of the day, if people want to just listen to individual songs that’s fine with me. I feel like a lot of artists are increasingly putting out albums that are just collections of songs. That’s how I felt about Plastic Beach by Gorillaz and the last few Bring Me the Horizon albums. There’s nothing wrong with it. I’ve got nothing against streaming or even illegal downloading. If people get my album illegally, that’s cool with me. I’m just glad they got the music and hopefully they listen to it!

(((o))): What kind of lyrical themes is the album dealing with?

DFTDD: We could sit here and talk about that all day. I like to use fantasy themes as metaphors. But by and large I’d say that a theme that runs through the whole album is “running away” and how hopeless and even damaging that can end up being. I won’t say too much about this so that people can draw their own conclusions and find their own meaning in the songs. I’ll definitely say that the lyrics come from a South African context and are largely shaped by the social situation here. Even ‘Lament for the Fallen’, which is very much so a nod to Tolkien (who I might add was originally from South Africa) comes from my perspective as a South African.

(((o))): What does the future have in store for you and can we expect to see Demons from the Dungeon Dimension doing live shows any time soon?

DFTDD: Goddamn, well I hope so! I just need to find some people to jam with!

(((o))): Thank you for the interview! Anything you would like to add?

DFTDD: Just my thanks and appreciation for taking the time to do this!