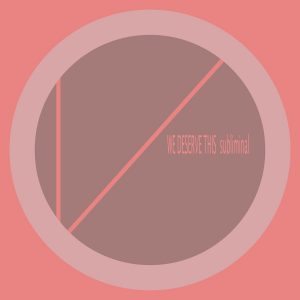 Similar to what we Americans have in Cloudkicker, Germany’s We Deserve This is the brainchild of Jan-Dirk Platek, a multi-instrumentalist who uses this moniker as a platform for exploration, both conceptually and tonally. Being the sole writer and performer allows for We Deserve This to release at a prolific rate. Platek has unveiled three albums and a number of singles in the short time frame between last October and now. His latest single, “Subliminal,” makes its debut today on Echoes & Dust.

“Subliminal” finds We Deserve This at a middle ground between the piano-driven neo-classical/ambient of Fusion and the heavier guitar-based leanings found on Pacific, discovering a solid balance within this space. It begins with a moody piano passage, establishing a foreboding atmosphere before settling into a thumping pace as the guitars and percussion pulse into the mix. There are echoes of both Tool and Russian Circles to be heard here, and as is often the case with the latter band, there are subtle but effective tonal shifts that greatly benefit the song as a whole. The darkness achieved at the beginning of “Subliminal” is deftly balanced by a passage beginning at the 2:38 mark which allows the song to soar for a moment before settling back into a reprise of the gloomy piano melody from the opening.

Fans of We Deserve This’ previous releases will find much to enjoy with “Subliminal.” It demonstrates Platek’s ability to take the varying musical tangents he has explored to this point and integrate them into a cohesive whole. Certainly this creates a promise of exciting material on the horizon, which – if he manages to maintain his torrid pace – should be making its appearance sometime in the next couple of months.