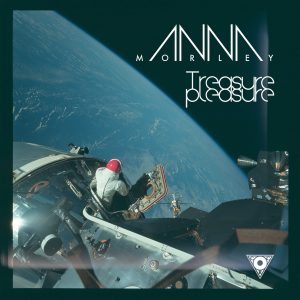 I have grown very fond of Water Door by Anna Morley, it is my kind of downtempo music, so you can imagine my delight when I heard that she had another album out, entitled Treasure Pleasure. I jumped at the chance to review it and immediately bought a copy after getting the nod from my longstanding and very patient editor.

I think downtempo music has lost its edge … too many compilations and a real lack of imagination has contributed to a real dearth of content. Morley and her work, however, shines boldly as an example of what is possible. When I reviewed Water Door back in early 2014, I spoke of Morley’s genius … I spoke of her ability to take a well-worn genre and give it a fresh imagining. This is why I keep coming back to Water Door and why I am so drawn to Treasure Pleasure.

Treasure Pleasure takes all that is great about Morley’s work – her love of sound and her ability to craft wondrously expansive walls of sound, her fondness for off-kilter rhythms that dance in your head long after they have passed, her use of ethereal vocals that bring a real and tangible sense of humanity – and polishes it, improves it, makes it better.

Morley has a gift for bringing wonderful sounds together and making vibrant, engaging collages with the various pieces: her use of vibraphone, keyboards, guitar, double bass, violin and cello, and her vocals all combine so well together in such a way to make it difficult to describe.

Take the Rhodes on “Mr Fox” that works in conjunction with the double bass to conjure up the very best in 70s soundtracks … or the smooth Rhodes and glockenspiel on “Inertia” that are so expertly juxtaposed against waves of distorted guitar and then overlaid with Morley’s exquisite voice to create a track that would form the cornerstone of a great soundtrack.

We then have the lilting, almost tropical “Fight Or Flight” with it’s backing formed around a plucked acoustic guitar (or is it a ukulele?) that creates a basis for the most delightful of melodies, expressed so serenely on a melodica (to my utter delight) … or Morley’s expertly executed cover of “From Gagarin’s Point Of View” by Esbjörn Svensson Trio (EST) with the distinctive melody played on Morley’s vibraphone instead of Esbjörn Svensson’s piano. The track is underpinned by eerie ambience from the cello, which works so well in comparison to the original. It is an absolute gem that I honestly believe Svensson would have approved of if he were still with us.

“Bruises” is another wonderful bringing-together-of-sound: violin, keys, beats and a wee smidgen of electronic manipulation work to create something truly beautiful. This is, in part, thanks to the collaboration with Thomas Prime, whose drum programming adds a little extra something to the track, and production / mixing of the overall album really does justice to Morley’s vision.

Morley is a visionary but isn’t a one-person band. Whilst she has written all bar one of the tracks on Treasure Pleasure and played the majority of instruments, she has also co-produced and co-mixed the album … working alongside Thomas Prime … she has worked with Jorge da Rocha (double bass), Ben Mahoney (“sonic pieces”), Kaio Moraes (violin), Alex Forster (acoustic guitar) and Nikolaus Herdieckerhoff (cello) to fulfil her vision.

And fulfil it, she has … at least from my perspective. Treasure Pleasure is truly a pleasure, one that will play a big part in soundtracking the second half of 2016 and beyond, one that I will treasure in the days and weeks to come.