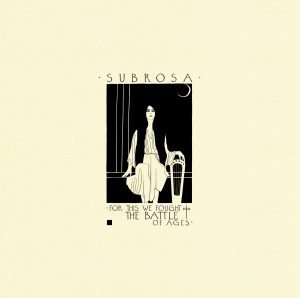 Subrosa’s last release More Constant Than The Gods justifiably garnered itself a ton of attention in the metal universe and found its way onto many album of year lists for 2013. (Including mine!) So the scrutiny on their new release, For This We Fought The Battle Of Ages I would expect to be very high. Fret not fans, in my opinion it exceeds expectations and polishes the strong vibrant sound SubRosa are known for, honing it into a more focused, potent and captivating, dynamic doom ride.

Like More Constant Than The Gods, …Battle Of Ages has some very long tracks. On the new release four tracks clock in at over 10 minutes. SubRosa’s tracks are epic journeys through staggering emotional highs that transition into sudden raw abrasive lows that hit like an ethereal sonic slap to your soul. The SubRosa journey is beauty then darkness, tranquillity then crushing, serenity fading into the ominous. If you enjoy riding turbulent musical waves then …Battle of Ages is a must.

The album makes a clear effort made to expose the wonderful vocals of Rebecca Vernon, Sarah Pendleton and Kim Pack on …Battle of Ages. Their vocal harmonies and solos are lush and palpably enticing and often precede a contrasting descent into a murky metal foray. SubRosa’s use of electric violin is a main factor in their unique sound. What impresses me about the e-violin is the many unnerving tones it creates and how profoundly it shapes SubRosa’s eerie unsettling sound. Throughout the album the unique mournful, serious inflections from the e-violins add a sombre character and venerable sophistication to their music. The contribution of the dual e-violin attack by Pendleton and Pack constantly warrants your attention.

Throughout ...Battle of Ages the pace is a slow zombie stagger. SubRosa show themselves to be the masters of the powerful plodding pace on the weighty track ‘Black Majesty’. The song’s pace makes the dramatic sections really standout. SubRosa consistently find the right creative balance with their content as they unfold their massive tracks. With such quantity it may take a few listens to fully appreciate the sudden time changes and subtle layers of instrumentation that weave and crash together. ‘Killing Rapture’ is a tale of two song. The first five minutes are slow and ponderous, but midway Andy Patterson unleashes a fury of toms that lead into a wholly gripping and fierce final five minutes.

One of my personal favourites is the groovy ‘Wound of the Warden’ that begins with a captivating bass riff by Levi Hanna. The song has a brilliant execution of “Loud/Soft”; it would bring a tear to Frank Black’s eye. From the churning melodies to the angelic verse: “How great it is, the transcendent goodness/ The self-assurance of the pure…” SubRosa sustain remarkably fine form over the duration of this imposing track.

Another pillar on this album is the 15m monster ‘Despair is a Siren’. The tracks builds a delicious sonic melody that slowly melts into a frantic disturbance. The grim moving vocals delivered by Rebecca offer some thought provoking words: “Like paper dolls we’re linked here / Homesick for chains / In their gilded whalebones / We gasp and wilt away … Despair is a siren calling through the night/ The earth wraps itself in a shroud / I curse my fate, I curse my free will…” Damn. The mournful ending feels like the world is slowly irrevocably fading to black.

For This We Fought The Battle Of Ages shimmers with its heavy atmospheric  ‘ancient magickal doom”.  It is a majestic triumph of melody and contrasting tonalities. The album showcases a more refined and focused example of SubRosa’s enchanting blend of aural darkness and light. I fully expect this album to find itself on more praise worthy lists at the end of the year. If this is the result of battling through the ages, then the fight was well worth it. An impressive achievement by SubRosa.