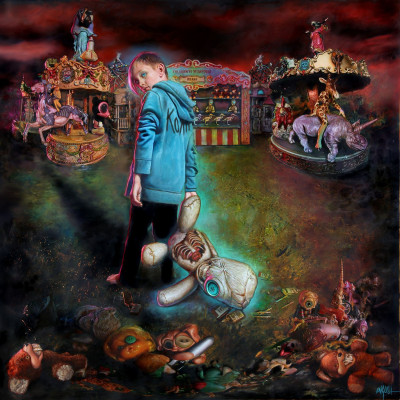 The Serenity Of Suffering by Korn

Like many bands of similar size Korn went through the motions of imploding record sales, substance abuse, egos spinning out of control, key members leaving and whatnot. They also released a couple of less than stellar records, including the much maligned The Path Of Totality, which saw the band working together with dubstep producer Skrillex amongst others. 2013 saw the release of The Paradigm Shift, which saw guitarist Head returning to the fold, but it wasn’t quite the return to form many hoped for. Let’s see what Korn’s latest offering, the eerily entitled The Serenity Of Suffering, has to offer.

Although earlier mentioned The Paradigm Shift wasn’t a particularly bad release, it simply lacked appeal. The song material was competently written and performed, but the overall clean production made it simply too sterile and too polished. Fortunately, that issue is dealt with on Korn’s new album. Producer Nick Raskulinecz (Deftones, Alice In Chains, Rush) superbly managed to capture what Korn is all about, namely relentless aggression, monstrous grooves, big hooks and anthemic choruses supplemented by subtle electronics and Jonathan Davis’ agonised vocals.

Indeed, The Serenity Of Suffering is a proper back to the roots type of affair reminiscing records like Issues (1999), Untouchables (2002) and Take A Look In The Mirror (2003). Tracks like ‘Insane’, ‘Rotting In Vain’ and ‘Take Me’ are just as potent in terms of sheer aggression and groove like more established Korn classics such as ‘Falling Away From Me’, ‘Right Now’ and ‘Did My Time’. However, that’s not the whole story. On the new album there’s plenty of room for more melodic moments like ‘The Hating’ and ‘Everything Falls Apart’. These tracks allows some breathing space on The Serenity Of Suffering. It doesn’t feel forced and it’s a sign of maturity. Evidently Davis and co have a come a long way since the angst-ridden days of Life Is Peachy and Follow The Leader. Another nice touch is the duet between Jonathan Davis and Corey Taylor of Slipknot and Stone Sour fame on ‘A Different World’.

Of course, many people still have a bone to pick with Davis’ lyrical prowess or lack thereof, the fact Ray Luzier isn’t the right kind of drummer for Korn, the band hasn’t progressed enough in a musical sense or the most ludicrous of all, namely whether they’re “metal” or not. As a relative outsider I really don’t care. The Serenity Of Suffering captures the best elements of old and newer Korn and I’m pleasantly surprised the band still manages to put out such a behemoth of record at this late stage in their career.

In short, The Serenity Of Suffering is an essential element in the Korn back catalogue and it can easily rival classics like Follow The Leader, Issues and Untouchables. Recommended if you still care for one of the finest acts to come out of the nu metal wave of the late nineties and early 2000’s.