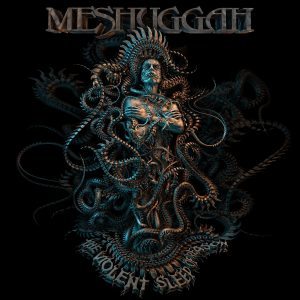 Like many people who play music that is both progressive and heavy, Meshuggah were critical to my development as a musician. Their unique approach to rhythm – namely their ability to create polyrhythms that snake in complex movements over a pulse – completely changed how I heard and created music.

My introduction to the band was I – a pummelling EP that moved between aggressive syncopated bursts and inconceivably chaotic rhythms. Even now this track represents what I love about Meshuggah – a balance between complexity and aggression, with a nod to experimentation and dynamic range.

On their 2005 full length, Catch Thirtythree, the band used technology to push their compositions to their logical extreme. Embracing notions of randomness and chaos, they created sprawling arrhythmic structures that exceeded the limits of what could be reproduced in a live environment. It was a challenging and risky artistic statement, but one I have immense respect for.

Where can you realistically go from there? Meshuggah didn’t quite seem to know. With their two following releases obZen and Koloss, the band seemed to flounder. There was something bland and uninspired about large slabs of those albums. They lacked energy. They seemed detached and uninterested – a far cry from the overwhelming intensity they showed on releases like Chaosphere, or the willingness to experiment that had regularly marked their recorded output.

I can remember seeing them live in Sydney shortly after the obZen tour. The sound was flat and unchanging. The performance passable, but uninspired. The sound was too perfect, too polished. As Jens Kidman made his comic frowny face I felt nothing other than the fear that I was witnessing a crude caricature of the Meshuggah I grew up worshipping.

It’s sad to see your idols falls from grace, but it’s perhaps sadder to see them slowly slip out of relevance. The idea that the band had regressed to the point of churning out respectable, but dumbed-down albums to ride the rising tide of of djent and milk the European metal festival circuit was disheartening.

So when I was passed a promotional copy of The Violent Sleep Of Reason a few weeks ago I did not hold high hopes – but right from the opening track I sensed something different.

For one, the production is markedly improved. Who thought that the addition of a bass guitar in the mix would add so much punch? And the drums! Tomas Haake drives the whole rhythmic beast of Meshuggah with his aggressive and urgent playing. From some of the fill-work he displays, it’s as if he’s taken a cue from fellow Swede Morgan Ågren. His performance marks itself as one of the best of his career.

And the aggression has returned. Tracks like ‘Born In Dissonance’ and ‘Clockworks’ throw back to the intensity of Destroy Erase Improve. Pleasingly, Fredrik Thordendal also seems to have brought back his obsession with Allan Holdsworth-like lead lines.

Curiously, the vast majority of the songs on The Violent Sleep Of Reason were written by Haake and bassist Dick Lövgren. Perhaps Thordendal really is a little uninspired by the whole thing (and just when are we going to hear Special Defects 2 mate?).

But perhaps the biggest change is the band’s decision to track everything live “for the first time in twenty of twenty five years”. Thanks goodness. The approach has almost single handedly reinvigorated the sleeping beast of Meshuggah. Certainly there are still some lulls – as with ‘By The Ton’ and the album’s title track – but overall this is the most authentic and intense the band has sounded in years.

The Swedish masters are back to show the kids how it is done.