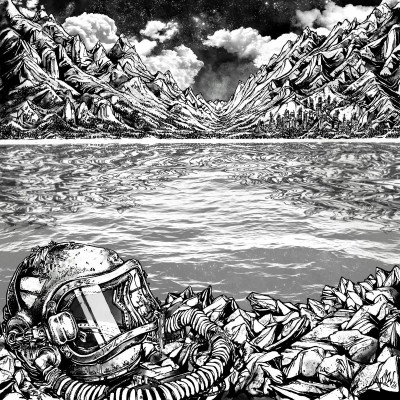 When you have a band that actually sounds like Gnod, Joy Division and 65DaysofStatic locked in a torture chamber with a pack of rabid rats you know you’re onto a winner. Chaos, disorder and a lot of awesome head-twisting songs, this is one of the standout releases of the year.

Opening with a wiry bass Peter Hook-esque bassline, Tanking The Piss puffs out its chest and spits back bile to set the tone for the album. Sickly, warped melodics. Barked vocals. A first impression reminiscent of military boots meeting decayed teeth. The erratic perniciousness of the track allows it to expand contract into different plains of aggression as it battles along, always sounding something like fighting in a bar on acid. The light tinge of a groove amongst the howls could likely entice fans of the now defunct Amazing Snakeheads to the band, it’s slightly lighter in the vocals and a bit noisier instrumentally so, there’s a fair compromise to be had there.

Throughout the first half of the album each song confirms the band as a raw, visceral explosion of saw-toothed carnage. Screeches and bellows, pounding drums. It sounds like the pissed off spirit a dying computer. Phantom demanding justice in an unjust world. The bass always a foundation beating ferociously like an angry heart charging into cardiac arrest and every breakdown slams a riffs repeatedly into dust.

‘Found in a Tract of Land’ stands out as an eruption of ritualistically pounding drums and surging bolts of guitar. The bass and the vocals do a good job of shaking the fucking earth and crushing the walls with the aggression of a bear with rabies on meth.

Further through the vortex, back into the wormhole, ‘Red, Again’ swelters to a boiling point with perhaps the most arresting moment on the whole album taking place in the climax of the song that leaves hallowed screams behind a path of destruction. Cattle is a band without affectation; raw and genuinely emotive.

It’s interesting to hear woodwind instruments injected into the mix; it’s getting fairly common in psychedelic music these days, well, bad trip music at least. When you consider bands like Gnod and Teeth of The Sea et cetera. The reason for that is simple though; it fits perfectly like a guitar solo in a thrash metal song, a mental breakdown on the oboe is a perfect for this sort of musical carnage. It’s also nice to vary things up to close an album of course.

Nature’s Champion is a pissed off, explosive album with a rare uniformity and a well-maintained standard of absolute excellence. All I want for Christmas is the angriest tour in the world Pigsx7, Gnod and Cattle.