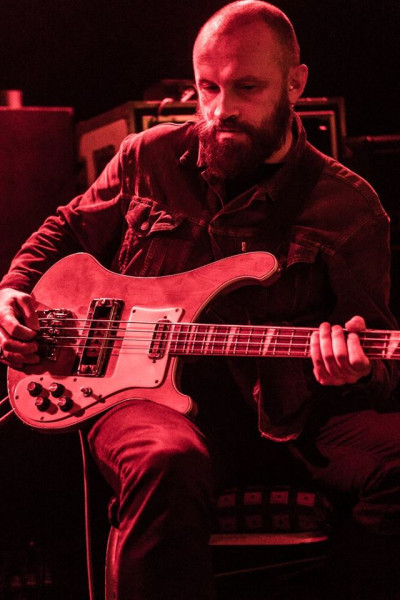 Between Mugstar, Sex Swing, Bonnacons of Doom, God Unknown Records and probably loads of other projects that I don’t know about, Jason Stoll is the busiest scouser in rock. I thought it would be best to check in to find out what’s going on in that brain of his.

(((o))): Magnetic Seasons was fucking class! Tell us about the record, was there a concept behind it?

Cheers. We had an idea to to record a double LP and had a number of tracks ready to record when we went into the studio, but weren’t sure we’d make the double. When we started playing in the studio it all came out. ‘Ascension Island’ for me is one track I’m really proud of on the record.

There was no real concept behind it at all. Magnetic Seasons – 4 distinct sides, someone said it is like listening to the seasons. We didn’t plan it that way.

We initially were going to record the album at Mogwai’s studio with Tony Doogan, but he fell ill and we had to cancel a couple of days before going up to Glasgow. We ended up recording it in Liverpool a few months later so it may have sounded very different had we recorded with Tony.

It’s 14 years now, quite unbelievable really. Longer than the Beatles! I suppose your goals always change. When I joined the goal was to do a 7″ record and to be played on John Peel. Then to do a Peel session, then an album, then to tour, to play in Europe, to play in the US. It constantly changes and evolves once you achieve something you want. I think that’s what has kept it fresh for us all and never felt stagnant. I remember reading an interview with Dylan Carlson or Buzz Osborne where they said ‘if you keep on doing it people will get it in the end’. Not sure people have got it fully yet so maybe there’s another 14 years to come…

(((o))): The Sex Swing album came out recently, how did that supergroup come about?

Well initially it was Dan, Tim, Stu and me at a BBQ and there was some talk of doing a band together and it sounded fun as these things do. So we first rehearsed in Hackney with Tim on guitar, but it wasn’t really working when he switched to organ and it made more sense… It’s worked out better than any of us imagined especially with having Colin and Jodie in. We’ve got whole load of dates coming up and gonna record a new LP soonish.

It’s the corner of a sculpture called ‘Soft Terminals’ by Alex Bunn. It’s definitely been a talking point.

(((o))): I saw Bonnacons of Doom at Raw Power, which has a very interesting visual aspect to it. Is there a story behind those freaky costumes and mirror masks?

I was the second last to join and the visual aspect was there already. I suppose it was to do something quite ritualistic, dark and menacing. I think that becomes especially true when you can’t see the face of the performer. We’d love to get two-way full face mirrored masks so we can see out with out the eye holes. Having Kate join on vocals has made the band. She’s has an amazing voice.

(((o))): You are the man behind God Unknown Records, which has released seemingly dozens of splits this year. You must be so proud, how the hell did you get that off the ground? Was it a ballache?

God Unknown Records has grown beyond my expectations. I’m up to my 27th release in just over two years, I’m very proud of the label. Sam Wiehl’s visual aspect has really helped. Initially it was asking friends bands if they wanted to be on it and it grew from there really so it was quite an easy process in reality. Proud to have released four very different LP on the label too – Cavalier Song, Henge, Peter J Smyth and Broken DC. I’ve also got a solo LP by John McBain (ex-Monster Magnet) coming out next year, which is a mind blowing piece of work and Volume 3 of the Singles Club. Good times.

Probably playing three sets at Raw Power with Sex Swing, Mugstar and Bonnacons of Doom even tho I had fucked my back up a few days before. I had to sit down the whole bloody time, but really enjoyed playing all three. Probably the best set Sex Swing set up to that time.

There’s so many great festivals around at the moment it’s hard to pick – Sineater, Liverpool Psych Fest, Supersonic, Raw Power, but I’d have to say that Supernormal festival holds dear a place in my heart. We took our 3 week old daughter this year and I’m sure she to loved it too.