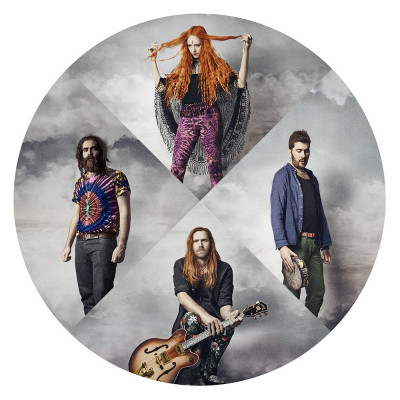 Lost In Love And Fear by Dark Moon

For fans of frolicking in unending meadows of dandelions, heart wrenching ballads, hallucinogenic mushrooms, cold dark city nights, deep introspective thought, dancing with abandon in the rain, or long walks on the beach. Take your pick as Dark Moon has something to offer all who partake in their voyage of the human psyche via sound. That is, for all who are open to the subverse. Dark Moon’s first long player was released on November 25th. With the aptly named Lost In Love And Fear they have propelled me on a bender in the coexistence of discovery, alarm, contentment, and the absence of sentience imbued from an audible crossing of the Rubicon. All of these present within just under 60 mins.

The first half of the album exhibits elements of modern Psych, Funk, Blues, Stoner Rock, and is also slightly tinged with Southern Rock. The latter half is decidedly more rooted in psychedelia. The remaining tracks observe slower tempos and melodies that are more fluid and plodding across wavelengths of exploring the boundaries of sound and the origin of audible thought. Both halves of sound consciousness are arched by the fittingly named track ‘Rainbow Bridge’.

Chris Egglestone (Drums/Vocals) and Justin Gartry (Bass) are like masons in that they have set the stage, and deserving high commendation, laid an immense cornerstone of rhythm and groove that advanced both Lola Ulalume (Vocals) and Callum Sadler (Guitar) to display and highlight their own unique talents. All of these components pool together in a bedrock of arrangement that honours function over form in letting the music, not an expectation of an intended sound, to guide the path. Equivalent to water in that they have taken the course of least resistance and allowed the album to take shape versus forcing it into existence. But life always assembles around water for nourishment. All four of their inputs have constructed a collection of works reaped from the full measure of their efforts, and were not “phoned in” in any way. This alone is evidence that passion within music not only lives on, but that there are still far reaches that have yet to be explored.

This may sound like a personal love letter to the band. And it may just be. But who cares because I love music, and Dark Moon has ignited a paradox in the contrast of different styles and still delivered a complete release. Notable tracks are the entire album! If you haven’t heard it yet then set a goal, make a plan, put Lost In Love And Fear in your queue, sit down(or take a long walk on the beach) and listen. There is no disappointment to be found. Not a single misstep, only unhindered expression and a style not easily classified. Besides, has Echoes And Dust ever given bad advice regarding music? I think not. The choice is now yours’. Listen to Dark Moon, or live forever deprived, as they have graciously left this creation for all to enjoy, and for our descendants to learn from and pay homage to. It should be painfully obvious that Lost In Love and Fear is to go down as one of 2016’s very best!