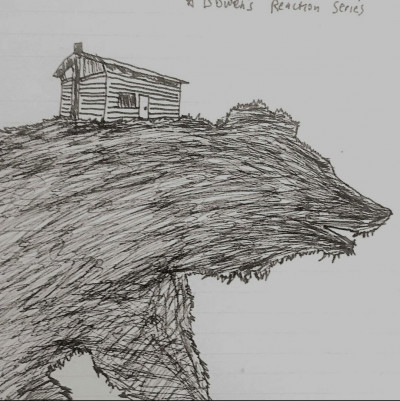 Young Mountain by This Will Destroy You

Golden drops from the bleeding sun pour onto the scorched Texan desert. Heatwaves bend the view of the faceless wasteland as the shadow of the colossal beast transforms the horizon. This is Young Mountain and This Will Destroy You!

Birthed from the Texan womb on June 6th 2006 came Young Mountain by This Will Destroy You (TWDY), a band that had no intentions of pressing their album beyond handmade CDR batches at the small collective of local shows they were performing at. However when Magic Bullet Records founder Brent Eyestone heard it, the sea parted and the words of God rained down from the heavens. He persuaded them to join the label and produce an initial limited run of CDs and a thousand vinyl, even securing a small tour. From then on the world has been theirs to destroy. A further three studio albums, live album and split EP with Lymbc System later they haven’t looked back as they continue evermore to move on tracks of never-ending light.

Young Mountain has always been the prized treasure of the Sierra Madre for me. It was in 2006 that myself and a small band of brothers began to awaken from our NME induced comas. Every couple of weeks we would sit sealed off from the world in our tiny frozen igloo (my friends’ parents conservatory) scouring the far reaches of Myspace and time for something new. Countless evenings disappeared like fireworks through fog as we shared what we each found from taking the deep arduous journey through the rabbit hole of the internet. It was here one wet and blustery evening that I shared the holy grail, Young Mountain. Even still, ten years on this penitent man sips from that such grail and with the recent reissue it’s never tasted sweeter.

The album artwork has always been permanently burned into my retina, the warming colours of the original cover and simplistic imagery capturing the tone of the album. The bear on the cover could be perceived as the young mountain of the title, who awakens from the slumber of its winter hibernation and, like some large forgotten beast from a bygone age of giants, shuffles into view shaking off the dirt and dust of the dry Texas wind. A wooden shack where we dwell for the 39 minutes on our pilgrimage through lengthy atmospheric effects, laden with guitar and distortion sits perched on its back like some lonely western hut from a Cormac McCarthy novel.

For those however who haven’t had the pleasure of listening to Young Mountain, now is the perfect time. The 10th anniversary edition comes with a bonus track ‘Sleep’ from the original recording sessions that slowly lulls us through the solemn night and acts as a perfect accompaniment to the updated album artwork. The bear drawn in pen looking tired and aged in front of a heavenly all-consuming glow fits with the guitars while they carry us through the moon-drenched night as moonbeams act as the strings to a violin and heavy drum beat the bear’s aged footsteps. ‘Sleep’ patiently fades out as the weathered beast meanders through the succumbing darkness of the desert.

The rest of the album plays as if we are traversing through a planet-sized cave of forgotten dreams. The opening chords of ‘Quiet’ that dwell in the annals of the mind will trap you from the start. Vibrating waves throughout Young Mountain cloak you in the echoes of the pitch blackness of night. A lobotomising wall of sound allows splinters of light to crack through as cymbals trickle like shooting stars in the universe before God begins to create life. Mountains breaching the ground rise above the mist while harsh stormy seas that crash against the shores are interwoven with the flowing water of a tranquil river stream. The almost alienesque communication of the roots frantically moving below ground on ‘Grandfather Clock’ in electronic Morse code adds a unique dimension. Young Mountain conjures breathtaking images of nature like that of a Werner Herzog film while we absorb the transforming landscape in such rich volcanic majesty.

TWDY have recently finished touring America performing Young Mountain and self-titled album in their entireties, playing two sold out shows in New York at Bowery Ballroom. They have come a long way since I saw them with a handful of people one night in Stoke for £4 back in 2008. All that’s left to do now is patiently drink the communal blood and pray they bring the tour over to the UK in the new year.