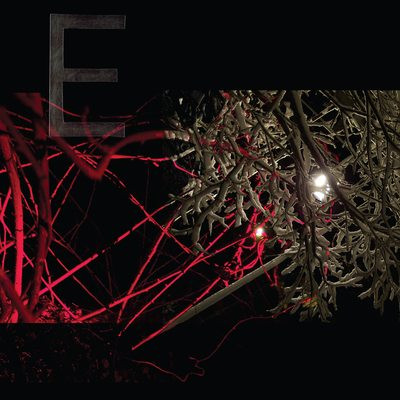 Thalia Zedek should need no introduction to anyone paying attention to innovative and adventurous underground rock over the last 30 years. Due to her pedigree as a member of Live Skull, Uzi, and Come, E will inevitably be known as the most recent Zedek-led band, but it’s actually a “super group” that includes drummer Gavin McCarthy of Karate and guitarist Jason Sanford of Neptune. While Zedek’s most recent solo output has drifted toward gentler folk and Americana, E traffics in the kind noise-slathered indie rock made popular by Homestead Records in the late 80s. This is in no small part due to the collaboration with Sanford whose band Neptune is known as much for its junkyard instruments as its noisy experimentalism.

On this debut, Zedek’s guitar histrionics and Sanford’s sculpted noise come together to weave a haunting tonal and emotional web. Repeated guitar figures, mantra-like vocals, tom-heavy drumming, crackles, jack noise, scrapes, and feedback build into hypnotic spaces that would feel almost comforting if there wasn’t such a pall of sadness hovering over everything.

Sanford and Zedek rarely sing together, instead trading and juxtaposing their own textures and personal laments. Somehow this back-and-forth within songs gives the record a surprising cohesiveness unlike most bands boasting two distinctive vocalists. Likewise, the lack of bass turns out to be unexpected strength. It hollows out large portions of the arrangements underscoring the feeling of emptiness and despair. When the low end does eventually appear, it’s monolithic, subliminal tones coursing underneath and filling in spaces that your mind didn’t know needed filling.

This is a mesmerizing record, at once familiar and strange — a worthy entry in the cannon of innovative guitar rock.