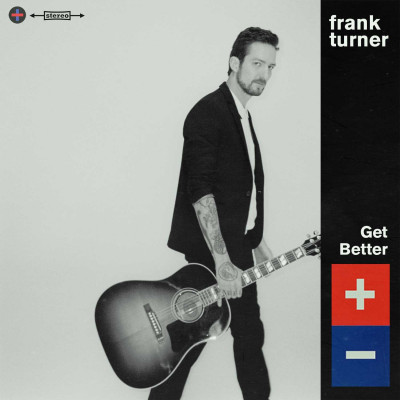 Frank Turner’s been around forever, hasn’t he? It’s been over thirteen years since Million Dead released A Song to Ruin and over 2,000 shows later, here we are. September 2003, with Martin Keown blindsiding Ruud Van Nistelrooy and the assassination of Anna Lindh. Another era. So I suppose that it’s about time that the world was treated to a considered video record of what makes the man tick to go along with his extensive words and discography.

Director Ben Morse has been there with Turner and Xtra Mile through it all. So it’s clear that it’s not going to be another Louis Theroux biopic, perpetual raised eyebrows ‘n’ all. This is a good thing, though; we get privileged access to Turner’s anxieties. The Sleeping Souls’ anxieties. Morse is trusted.

It opens with Turner saying that the filming period has largely tracked a period of crisis. So we’re set up to expect bad things. But, frankly, they don’t ever come. Get Better predominantly tells a story of a man who puts colossal pressure on himself to achieve all of his dreams. He wants to be recognised as a seminal folk singer. A man of the people. To have created a perfect record. Perhaps to be able to move on from the various excesses of his current lifestyle and settle down.

But Turner has never gone backwards. Drummer Nigel Powell says it best; there hasn’t necessarily been an explosion at any point but steady progress has never eluded them. From 93 Feet East to the Main Stage at Reading via the Olympic Opening Ceremony, following Turner’s career has gone from rattling around with £4 cans of Red Stripe to a worldwide audience with no room for elbows and a colossal queue for the bar. You can no longer just pop along to one of his shows on a whim; he’s already sold out the best part of a four-night residency at The Roundhouse in May.

Maybe the ‘crisis’ is that he can’t bring himself to slow down. To pipe down and have a sit. It’s clear that he’s happiest on the road, developing a new audience and meeting new people. Because that’s the thing about Frank Turner. He isn’t quiet. He puts himself out there. He fights. He takes risks and makes himself vulnerable. This film is a risk. It could be a document of a period near the end of his career. Or another mile marker on his journey towards a kid playing one of his songs at a beach campfire in 2046. The thing is, music doesn’t necessarily have a correlation between effort and success. Get Better is, for now, a friendly and tentative look at an ambitious person who is unsure of the next step. Returning to it in a few years when we know what happened next may well yield more.