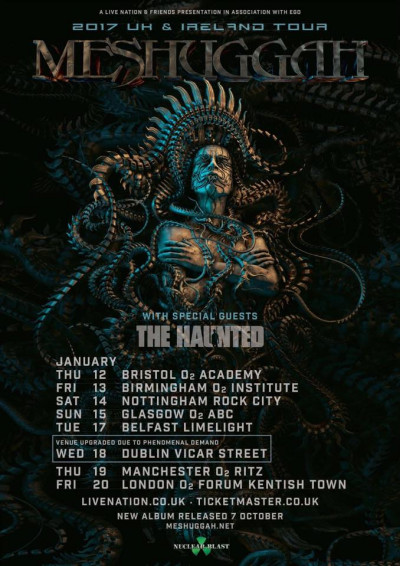 Meshuggah at The Forum

Friday night at The Forum, London, was a double-act of Swedish metal, featuring heavyweights The Haunted and even-heavierweights Meshuggah, a duo contrasted in tempo, who show you how intensity can be achieved via different means.

We haven’t heard much from the Gothenburg melo-death veterans The Haunted since 2014’s Exit Wounds (also the year At the Gates, from whose ashes The Haunted themselves were spawned, made a comeback), a straightforward album of tight, aggressive thrash that seemed to show a return to form, much to the delight of long term fans. In 2017, having extended their contract with Century Media Records, The Haunting have a new record on the way, and it feels like they’re using this tour to get themselves back into the groove.

I feel a distinct lack of clever things to say about The Haunted’s performance here in London – they were The Haunted and they did it well. They played a mixture of songs from throughout their 20-year history with an effortless ease to what was an already maxed-out crowd. This may not be particularly flattering, but The Haunted are a great warm-up band. This is fast and relentless mosh-pit music, it gets the crowd fired up for the main course to follow. Despite the intensity of the music, there’s a lightness to their attitude – they have fun and don’t take themselves too seriously. Sure, after 45 minutes, all of their songs blend into one, but they’re still a great, energetic live band after all these years.

2016’s The Violent Sleep of Reason was Meshuggah’s first album in four years and was notable for being, by far, the most organic-sounding release of their career. This was achieved primarily through the band recording their parts simultaneously, live in the studio. The beauty of this approach is that it translates perfectly to a live setting – on The Forum’s stage, Meshuggah perform as well as they do on record.

Metal, more than most genres, suffers from music made less through performance and more through programming and copy-and-pasting – Meshuggah themselves have produced a great many albums this way. The result is often music that sounds artificial, cold, and just too perfect. Then, you see the music live and you’re disappointed that in-person the band cannot hope to live up to that perfection. So we have much to thank Meshuggah for. I sense a trend in more metal bands opting for organic live-sounding music – though not a trend kicked off by Meshuggah by any means, one can only hope more people follow in their footsteps. For all this talk of organicism in Meshuggah’s new sound, it’s not really Earthly-organic, though, is it? Meshuggah sound like the metal equivalent of H.R. Giger’s Alien – other-worldly landscapes, and machinery that looks alive.

Another aspect of Meshuggah’s sound that lends itself to the stage, an aspect that’s been with the band throughout their career, is their rhythmic, chugging groove. Jagged and angular guitar riffs – djent before it became insufferable – the odd-time signatures supported by Tomas Haake’s masterful drumming. The result is hypnotic and looking around the crowd you get the impression that we’ve entered some mass trance. The sheer force of Meshuggah’s sound is crushing, a gravitational force that pulls you in.

Over the course of one hour and thirty minutes, Meshuggah, as well as performing songs from the latest album, play music from throughout their (almost 30-year) history. The only real criticism I’d level at the performance is the same issue I’ve always had with Meshuggah’s music when listened to over extended periods; their music isn’t known for inventive melodic variation or a varied colour palette, so it doesn’t take long before my attention begins to wane.

But I can’t highlight this as a particular shortcoming of this evening. If you love Meshuaggah’s music, it was an absolute treat.