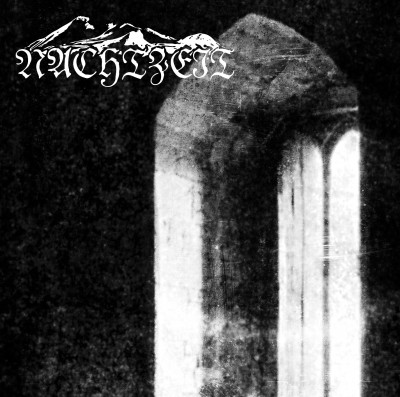 Sagor I Natten by Nachtzeit

When it comes to black metal, I have noticed throughout my years searching, there is one trait, beyond those most immediately recognizable, that keeps me coming back for more, an almost trance inducing barrage of sound that forms from the static, feedback, distortion, and reverb to settle into a discernible pattern that gets repeated almost to the point of being forcibly drilled into my brain. Also, for obvious reasons, these riffs or progressions must have some lasting value to them. I want strange tunings and strange chord progressions, but ones that garner my steadfast attention. I want dissonance harnessed in a way that it almost becomes catchy upon repetition. I have heard it in the best of the genre’s second wave, as well as other outliers of the genre: The Ruins of Beverast, Woods of Desolation, and Paysage D’hiver.

I can now safely place Sweden’s Nachtzeit, a one man endeavor, on this list after his second EP in as many years, Sagor I Nattens. Henrik Sunding, the main man behind this project as well as many others including Lustre, has stripped the keyboard atmosphere of his previous band and has gone for a more bare bones black metal approach with just guitars, bass, drums, and screeching vocals, that is of course besides the Burzum-esque instrumental track, ‘Over Myr Och Mark’. I would say that this shift in sound is a formidable step forward in the right direction. While I do enjoy atmosphere of Lustre, when basic black metal can be this expertly crafted, you do not need to add anything else to mix.

All three of the other tracks let you know where they stand from the start; they are going to blastbeat you into submission with riff driven black metal. The riffs and progressions presented are hypnotizing in their simplicity and execution, there is a reason for these riffs to be repeated throughout the song, they demand it. Though, before you through your hands up in disgust for having to sit through droning songs with repeated riffs that never end, in songs that last for twenty minutes, where you are left begging for some sonic shift, no song on the album lasts longer than seven minutes. The longest song on the album, ‘Dar Allting Har Sin Borjan’, stands at breezy six minutes and forty-eight seconds, at least two minutes longer than any of the other songs on the album. It is with this brevity that Nachtzeit has triumphed. These riffs do not overstay their welcome, you are not tired of them by the time they’re done. These songs last long enough for you to be intrigued, enjoy, and then want to come back again.