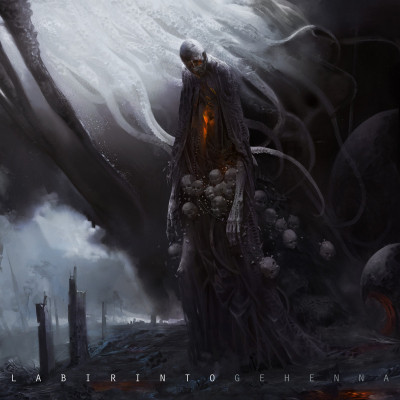 Based in São Paulo, Brazil Labirinto may not be hugely known among audiences in the UK, Europe, or the US. But they have a deeply rooted awareness among those of us who report and follow the instrumental and heavier sides of the music dominion. I am positive that will change very soon as their latest long play album titled Gehenna is set for release on February 10th, 2017 through the well-established Pelagic Records. Pelagic’s presence is vast and their roster includes many of the best to be heard. Of which Labirinto can now rightfully be included. This album is a beast all unto itself. Not to mention the artwork that portrays an accomplished wraith proudly displaying his conquests while subordinate sentinels keep a watchful eye over those still writhing in pain within the clutches of his torment.

Gehenna can be considered as one complete sound saga as each track flows into the next. However, there are many separate tales to be heard, but it could have just as well been released as one continuous song (see the 25 minutes long single ‘Maseo’) as what I hear is an epic of tragic proportions. Whether it is through a restrained interlude or in the gnashing of one riff to the next, this creation is a ship with a cracked hull lost in a forsaken sea void of light and ill-fated to drift about with no impending mooring in sight. Labirinto returns with a menagerie of their trademark doom riddled undertones and cursed melodies of ruination. Hell, even their use of strings sound like a downward entrance to the foyer of a torture chamber. And for those who love their so called lighter side, you will also find the same style of melodic vacancy of hope still governed with a sinister undertow.

Like a dark cloud that you cannot outrun, Labirinto furthers their apocalyptic audible propaganda across a desolate plane with no quarter in sight. Gehenna is the archetype of what damnation would sound like. If you don’t like it heavy, then don’t listen. But count that as another of life’s mistakes as you will sorely miss out on a dynamic album that will keep your ears enthralled for an hour. With the recent signing and an upcoming European tour on the horizon, I predict many positive changes in the future. In short, victory is nigh!