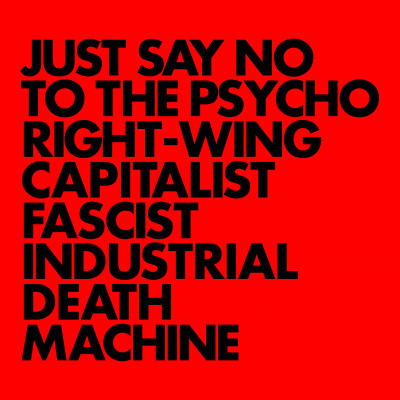 How the fuck is it that we seem to get another excellent Gnod album every year? Whether it’s 2015’s extraordinary triple-album, Infinity Machines, 2016’s brutalist classic The Mirror or this year’s bold, defiant and sloganeering JUST SAY NO TO THE PSYCHO RIGHT-WING CAPITALIST FASCIST INDUSTRIAL DEATH MACHINE, the statement holds true; every year the band releases a new masterpiece and in addition to that incredible feat of musicianship, they’ve also contributed to 2017 likely being Rocket Recording’s best year to date as well as releasing an incredible ambient collaboration in between their releases on their Tesla Tapes label with Anthony Childs.

Gnod are the deviant, stoic, fervent geniuses we need at the helm in the war for the ethical reigns of our society; as Trent Reznor once said “art is resistance”. We can’t trust the government, the media or even the electorate; right now, everyone is looking out for number one and suffering is becoming an industry of its own but the slaughterhouse of human happiness is like an abattoir that no one enters, they just reap the rewards of its misery and plead ignorance to the pain they helped to manufacture with their desires. It’s supply and demand, bodies for money.

The first time I heard ’Bodies For Money’ was at The Buyer’s Club in Liverpool, I had never seen Gnod before but, I was later told by mein bruder that they sometimes keep songs in the vault for years and construct their sets and albums with a great deal of thought and meticulous planning. It’s interesting that two of the only other bands I know do this sort of thing are Radiohead and Nine Inch Nails; two of my favourite bands of all time and two of the only bands that really operate on the same level as Gnod, who are also one of my, favourite bands. It suggests on a prima facie level that maybe bands should be less gung-ho about charging in with the first ten songs they have into their studio or even the first twenty whittled down and that they should instead test their songs out on the road and find their album through thematics and intersections between a wealth of material, carefully harvested over the years.

Maybe I’m wrong though, maybe Gnod recorded this album years ago and they’re always recording and they’ll just drop one flawless album every year, year after year, until I die or they return to their home planet. It seems feasible at this point, they’re on another level. It’s funny, I met and had a great conversation with Paddy Shine at their gig in Liverpool and found him to be incredibly insightful, surprisingly tender and vastly diverse in his interests and yet, despite that, I still don’t believe that he hasn’t got some sort of lightning bolt superpowers or alien DNA. Name a band that has had the string of magnificent albums in a row that Gnod have, I’ll be surprised if anyone can successfully do it without bring up a band like Nirvana or Pink Floyd or such other insanely high level artists. A lot goes into what they do, it’s tangible in their music. It was tangible in the room, at The Buyer’s Club, when I heard the raw version of ‘Bodies For Money’, the crowd became like some motorised spindle of wire wool, violently swirling and shedding in all directions, head’s banging and arms flailing, each countenance beset with sheer awe and it was fully justified.

This is a band exactly on the fringe, over a year before anyone else gets there, watching the zeitgeist in the rear view mirror whilst their album is being prepared for release; as we’re trying to catch up, they’re preparing their next release. It’s like they saw Brexit and Trump and the near-on totalitarian assaults on the free press, all this nationalist bullshit coming a mile off and they shaped it into a work of genuinely, anti-establishment art. It’s in the sonorous, industrial punk guitar lines and the aggressive, merciless rhythm section but, most of all its in the powerfully, defiant and subversive lyrics “bodies all over the place, but still they want your money, they can keep the fucking money” – it feels like a complete renouncement of the rat race and the “costs of doing business” and these bastardised capitalist ideas, that everyone and everything is for sale, that the “almighty dollar” is more powerful than the human will or more valuable than human life and that’s what this rise of nationalism is…it’s selfishness and self-preservation preying on the weak to save your own neck in the psycho right-wing capitalist fascist industrial death machine.

If memory serves me correctly, I first heard a very different version of ‘People’ at The Buyer’s Club last year and it stands out now for the same reason it did then; it’s a pernicious assaulting, arresting dirge that sounds like what it is; a lamentation of the preciousness and vulnerability of humanity against the predatory, wickedness and greed of humanity. People are a horror show of self-defeating exhibitions. Communism doesn’t work because the selfish victimise the weak, capitalism barely works for the same reason but, worst of all it should work, democratic, capitalist, meritocracy should work but, people aren’t educated enough to maintain it. We are entering an age of information, if we are not plunged into the depths of ignorance and 1984-style restriction on thought in the next decade or so, will these oil barrens, these tax write-off fuckers, these landed gentry be held accountable for their corruption? Can people take back the power? Are we all fucked? Will the vulnerable continue to play prey for the powerful, will the working class continue to be pitted against immigrants and people on benefits and whatever else may come next to fuel fear and hatred? Everyone always underestimates the working class vote but, they also seem to underestimate another factor in politics; the right-wing are far better at it because they don’t have to play fair or maintain an ethical stand point. That’s why the poor always lose in the UK, we more often than not have shit Tory governments and when we escape that we have horrendously inept Labour governments, yet, the two-party system is safe so everyone stays in it. People. Fucking people. The relentless, doom and gloom in this track, is valid, the sharpening blades of guitar skidding in and out, the violent thuds of post-punk drumming, “you get what you deserve”, people, people, people, people. Its hopelessness is validated by the seemingly powerless position we have in the grand scheme of things. Even if we work on civil liberties, our system is inherently rigged so the rich stay rich and the poor stay poor, when the upper class take too much we bail them out and then they blame the weak and the vulnerable and people turn against them rather than holding the corrupt accountable because we all feel so powerless that it seems absurd to think we could ever change a system that relies and depends on us, on the majority, not the few, yet we’re all divided and full of fear and it all works against us. People.

’Paper Error’ sounds like a machine’s anxiety, “fear, fear, fear, fear”, my guess is that the track itself is about the heartlessness of bureaucracy; how a person can be kicked out of their home or even a whole country with a letter from someone who claims that they decide who belongs on a mass of land, ironic perhaps that if such laws existed when Britain seized the world in the first place that the country would never plundered and pillaged so many benefits from colonialism and imperialism; we’re still seeing the fall-out from those war crimes today in the ruined countries we left behind and in the parasitic monarchy we for some reason allow more than simple celebrity status in a time period where their divine rule is completely diseased and irrelevant. I do like The Queen as a person, I just hate everything about the monarch’s place in our society. How many friends do we have to lose to paper trails, how many cover-ups and illegal wars and bureaucratic acts of savagery do we have to witness before we learn as a people to police the police, to police the government, to police the powerful because it is the weak and the vulnerable who need to be spared from this bullshit society? I do also think the track is about the detrimental role of fear in society as a motivator for violence, greed and overall, selfishness as the in violet song says “if fear is the weakness then, everyone falls”.

The drumming really is on a whole other level on this album, it’s somewhere between Stephen Morris’ Joy Division drumming, BJ from HEALTH’s self-titled drumming and Jerome Dillon’s work on NIN’s The Fragile; it’s violent, pattern-based and razor-sharp. There could also be some case for comparison to Todd Trainer’s drumming for Shellac. ’Real Man’ does a good job of highlighting this stellar percussion in its introduction. The album’s cohesive production is also key to its consistently vicious, anarchic and pissed-off sound, I love how it has this dichotomously polished and abrasive quality to it; everything is at its very limit. What’s more is every single piece of instrumentation on the album, every bit of the performance and realisation is magnificent. Even the use of sampling to segue tracks in and out of each other and add idiosyncrasies is perfectly sparing and expectedly satisfying.

The lyrics of ‘Real Man’ and ‘Stick in the Wheel’ deal with similar issues of masculinity and affectations of manliness in relation to societal fears and stigmas, ‘Real Man’ is more heavily focused on the subject and I guess the point of the track is to disavow all that bullshit as masking insecurities, whereas ‘Stick in the Wheel’ ties this into the idea of the human experience struggling against capitalism and societal pressures in our democracy that shape people through an ideological apparatus of cultural oppression that preserves the dominant ideology to maintain warped power structures and greed. I wonder if any of this track was written for Infinity Machines, the middle section of the final track is almost like a waltz through the band’s past few albums with elements reminiscent of The Mirror also appearing. The finesse of Gnod’s music is just awe-inspiring; they successfully collate this myriad of styles in such a meticulously tight fashion that just oozes this strange mechanical sense of fluidity like a machine effortlessly performing the same surgical procedure repeatedly and yet their music is so intensely emotional and human at the same time, I can only really compare them to the likes of Bowie and Nine Inch Nails, they’re a band on a complete different level to any other in this underground music scene.

I feel like with this latest album, we are delving further into a journey through grief with Gnod: we had the denial and escapism with ‘Infinity Machines’, we had horror and depression in ‘The Mirror’ and now we have a focused, meticulous rage and anger from the band like never before. If you’re not grieving for some semblance of hope right now, you should be and you should be angry because we shouldn’t have to settle for this reptilian wasteland emaciating our society, we have to show people the damage being done. JUST SAY NO TO THE PSYCHO RIGHT-WING CAPITALIST FASCIST INDUSTRIAL DEATH MACHINE.