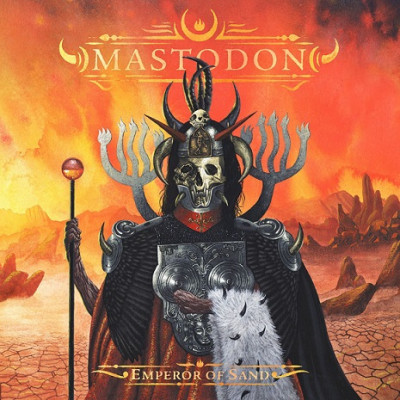 Emperor of Sand by Mastodon

Emperor of Sand, the seventh studio album from Atlanta’s Mastodon, has been one of my most eagerly anticipated albums in some time. The transition from the early heavy metallic sound to the much more palatable melodic sheen that features now doesn’t sit well with some in the metal fraternity. I’m one of those minority fans who have been enthralled with the progression and who thinks Once More ‘Round the Sun is a much better album than Remission or Leviathan. At this early stage I’m also of the opinion that Emperor of Sand, may well be their finest album yet, the perfect combination of heavy riffs, blistering drumming and magical melodies.

For some, a big point for discussion is the vocals of lead guitarist Brent Hinds. I’m more than aware of the cat strangling exploits of Hinds in the live scenario, but I find a strange allure to his singing style. One of Mastodon’s strongest features is the vocal interplay between all of the band members. I also read some negative comments regarding the album’s artwork. The garish splurge that appeared on Once More ‘Round the Sun caused offence and there was a similar what-the-fuck moment when the artwork for Emperor of Sand was revealed. But it makes more sense when you learn of the deathly theme running through the album. The reaction to the artwork was nothing compared to the outcry over the band’s poppiest moment to date, the incredibly catchy ‘Show Yourself’, which appeared ahead of the album’s release. Dividing fans down the middle would be grossly inaccurate as there seems to be only a handful of us who actually enjoy the song. But then this is something the band tried with the last album, there were heads being scratched when ‘High Road’ first appeared, I love that song too as it goes.

In terms of overall sound, Emperor of Sand aligns with 2009’s Crack the Skye, which is understandable considering both albums are produced by Brendan O’Brien. Throughout the album, the guitars crunch and the drums punch as you would expect, the overall sound perfectly complimenting the stellar tunes. Opener ‘Sultan’s Curse’ took a while to seep into my head, but the glorious bridge where Hinds sings “memories of loved ones are passing me by”, his voice quivering with emotion is a stunning moment from the off. While the song has no chorus to speak of, the melodies are flying, hooks are in abundance and Dailor’s voice is in a register that fits so well. Hinds rips out an immense solo that fits perfectly over the propulsive riffs from Bill Kelliher.

As has been mentioned, melody permeates throughout the album, the insanely catchy ‘Show Yourself’ has the most simplest and basic of riffs, meaning it latches into your brain after one listen. Even Troy Sanders takes the chance to sing a little more than his regular growl. Tracks like ‘Precious Stones’ are the perfect blend of metal and melody, Hinds lays out an easy rolling melody before Dailor joins in for a huge chorus. It is Dailor who provides the twisting verse melody of ‘Steambreather’, the pre-cursor to a monolithic chorus. The main riff is spidery and the drums/percussion knock down tall buildings, then there’s the solo that seems to fall from the sky, hit the ground and charge off into the distance.

It’s this section of the album that brings me most satisfaction, the galloping grooves of ‘Roots Remain’ allow Sanders to get as melodic as he can get before the sky scraping chorus roars along. Dailor’s downbeat bridge is highly melodic and the keyboards and chimes add elements of Sanders’ side project Gone Is Gone. The only low-point is an earth shaking robo-voice that I could probably have done without, but it is redeemed by some luscious rolling piano at the end. Mastodon are prepared to diverge away from traditional metal sounds and it’s for the best in my opinion. The influence of Gone Is Gone also comes to the fore on ‘Word to the Wise’, although the chorus is more of a yawn than the strong forceful melodies that Dailor provides. The mid-section echoes Deftones’ dubbier bass sounds then there’s a monumental slam dunk into the final chorus.

Mastodon are certainly a band who now apply structure to their songs more so than their earlier output, however when you have multiple vocalists, it runs the risk of leaving songs sounding a tad formulaic. You generally know when Dailor is going to intervene with a chorus when Sanders growls out a few lines for the bridge, or Hinds shimmies in and out as he pleases. So they mix things up a little on ‘Ancient Kingdom’ where Sanders gets to do the soaring chorus honours, as best as he can, with his limited range. The guitars playfully snake some marvellous melodies and the added chimes again bring lighter textures. Hinds returns to the fray having gone missing for a few tracks with a neat little bridge then a joyous solo that would never have featured on the band’s abrasive earlier albums.

With the trio of ‘Clandestiny’, ‘Andromeda’ and ‘Scorpion Breath’, I find my attention wandering as none of these songs are as memorable. The latter two tracks feature guest vocalists from heavier acts, Kevin Sharp from Brutal Truth and Scott Kelly from Neurosis. Both tracks are much heavier and suffer from sounding like too many ideas bolted crudely together. ‘Andromeda’ does feature one of the best solos on the album, being both bluesy and soulful at the same time. I have to mention that the intro to ‘Scorpion Breath’ is pretty much the same as the intro to Ian Brown’s ‘Golden Gaze’. But it’s this track that fans of their earlier work will likely gravitate towards.

Album closer ‘Jaguar God’ was apparently lined up for a Brent Hinds solo album, which hints at an exciting prospect. He quietly sings a tender melody over gentle languid guitars and a simple tambourine lead beat. Pianos bring is some additional smooth textures before the pace picks up along with the guitar volume and drumming complexity. A brilliant vocal melody from Dailor winds the song into prog-rock territories before Troy wanders into the mix and brings the thunderous riffs with him. Atmospheric keys add extra welcome dimensions then the track goes full-on metal attack but with that element, the melody goes out the window. As the pace slows down again the soloing is fluid and soulful. It’s a very fine climax to an outstanding album.

Perhaps the reason I have little or no interest in Remission or Leviathan is because I only got into Mastodon with Blood Mountain. I’ve tried to go back to those albums to engage them but they don’t engage me, due to the lack of melody, compared to the modern day Mastodon. At the end of the day, the band are reaching a wider audience and I think it pertinent for them to make music this melodic when they have the ability to produce such bloody great tunes. Just how this album will translate into the live environment remains to be seen, with Dailor performing so many of the vocal duties as well as the usual very high standard of intricate drumming. As I said at the outset, I eagerly anticipated Emperor of Sand and Mastodon have not disappointed with their most melodic and accomplished album so far.