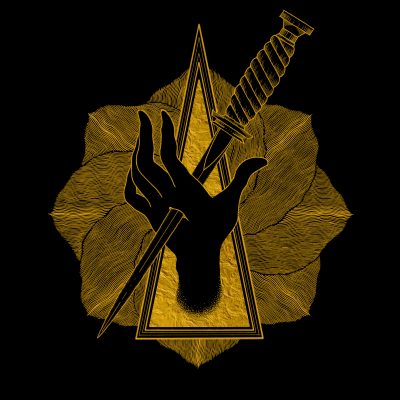 Louisiana duo Radiant Knife make a hell of a racket for just a guitarist and drummer. It’s probably wise to forget the whole two-piece novelty for a second too, because that might detract the listener from a wonderful display of musicianship and a fantastic melting pot of influences that permeate every note played on their self titled debut.

Opening instrumental ‘Choose Your Necrodestination’ is furious as it is intricate, pummelling riffs lay the groundwork for contrasting synth work that sits perfectly in the mix, not drowning out the chaos underneath, not unlike King Crimson at their heaviest. ‘Vacant Faces’ introduces vocals amid the chaos, drenched in reverb and echo reminiscent of modern psychedelic rock. Underneath it all, drums and guitars lock in place perfectly, ranging from Mastodon-esque off-kilter pummelling to mid paced grooves to rival even the mighty Meshuggah.

The guitar work in ‘Haze’ ramps up in the intensity as Jazzy lead parts take the centre stage while the drums continue to crash and roll, never letting up. The dissonant chords that provide the backdrop for the melodic synths would not be out of place on a Today is The Day album, especially in the songs latter sections where the band settle into a fantastic mid paced groove that is irresistible.

‘Emotional Wastelands’ goes back and forth between catchy lead guitars, and single note bends where the manic vocals contribute the unsettling atmosphere. Comparisons to post-metal contemporaries such as Intronaut would not be unfounded, but Radiant Knife are too concerned with the intensity and fury of noise/math rock to sound too much like their piers.

On ‘Shedding Black’, the longest song on the album, Radiant Knife once again display how the synths and keyboards are their secret weapon, adding to the atmosphere which continues to build with the rest of the instrumentation. The vocals are fantastically executed on this cut, as they weave in and out of the massive wall of arpeggios, before the band are once again off on their stop/start riffs.

At only 6 tracks, Radiant Knifes’ debut album never drags, which is extremely important – as a common grip with this kind of music is self-indulgence. As the surprisingly melodic ‘The Lude’ closes the album, you’ll be left wanting to start the album over again. Subtitles in sound sit perfectly next to punishing riffs and clever songwriting that demands your attention over and over.