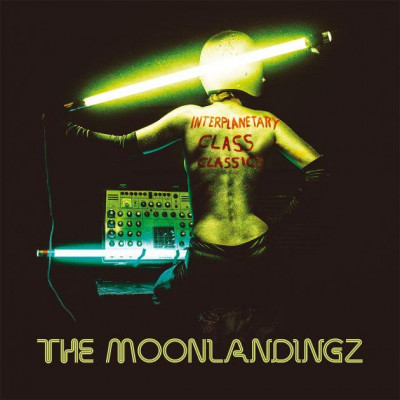 Interplanetary Class Classics by The Moonlandingz

Welcome to the discotheque at the end of the world. Well, if not this world then a very similar one in a parallel universe, for here is a make believe band bought to life by strange uncanny powers and sheer force of will. Let’s say it started on an alternate earth where Delia Derbyshire was declared a deviant and pre-digital electronic music was pushed underground. Pioneers Can and Kraftwerk were forced to make a living playing illicit sex clubs in Berlin, a soundtrack to swingers swigging cheap Leibfraumilch, bondage and spanking. Zip forward in time and that scene has been lovingly recreated by The Moonlandingz on Interplanetary Class Classics for one last blow-out at the End of Times, only with better booze and a more glittering guest list.

Meanwhile, in our reality, a track that appeared on the last Eccentronic Research Council’s last album Johnny Rocket, Narcissist And Music Machine… I’m Your Biggest Fan, ‘Sweet Saturn Mine’ created by Adrian Flanagan and Dean Honer and guests Lias Saoudi (aka frontman Johnny Rocket) and Saul Adamczewski of Fat White Family, gained such heat and enough airplay that The Moonlandingz were dragged into existence, or perhaps summoned like a particularly noisome demon from their own grubby dimension.

Opening track ‘Vessels’, a Glitter band stomp, lays down one of the key touchstones early, the filthy ghost of Earl Brutus. With it’s old-enough-to-know-better electro cock-pop featuring fantastic skronking sax and sweeping harmonies it is quick to the gabbling climax. It’s enough to pull in the punters of a certain persuasion, me included.

First single proper ‘Black Hanz’ is an odd proposition on paper, not least Saoudi’s tremulous, hiccuping Buddy Holly-esque delivery. Monty Python meets Stereolab via a big beat remix is as close as I can describe it, with fantastic powerhouse drumming from Ross Orton.  There’s then a rare foray into a grimmer reality, something other than sex and hedonism on ‘IDS’ – all Suicide tough metronome monotony, which entirely suits its subject matter as a robotic voice repeats “40, 000 years of job club“….yikes.

Even more surprising is the note perfect Velvet’s tribute (updated with Twitter speak lyrics) of ‘ The Strangle of Anna’. A duet between Saoudi and Slow Club’s Rebecca Taylor, it’s like Lee Hazlewood and Nancy Sinatra’s ‘Some Velvet Morning’ turned into a crime of the heart scene, and is achingly cool. As are the spooky retro stylings of ‘Theme from Valhalla Dale’ which is a brief nod back to ECR’s last album, before the fun begins in earnest again on ‘The Rabies Are Back’.

The band have been candid in admitting how much fun they had making this album, finishing it all off at Sean Lennon’s upstate New York studios, and you can hear it on every note of this album, no more so than on  ‘The Rabies Are Back’,  a contagious, joyously weird pop song that deserves its’ own novelty dance, like The Timewarp. I can see the video now – a riotous foam party with loads of drunk blokes dressed as ‘massive werewolves’.

The better booze I mentioned at the start of the review is celebrated on ‘Neuf de Pape’ – a semi-religious ode to posh French grape juice, and another banger with strafing synths and all manner of weird and wobbly sounds. This will keep you on the dancefloor swigging from the bottle.

But, oh dear, it’s gone dark as ‘Glory Hole’ plants you firmly back in the Berlin sex club, all rohypnol, leather masks and buggery. Again, it has the queasy air of Earl Brutus, but over repeated listens it begins to pall, just a bit too puerile to be a long term love, although the chorus is typically effective.

By contrast ‘Lufthansa Man’, with it’s glistening krautrock synths, is thing of pure beauty (considering the creators). Over excellent restrained but artful guitar licks by Adamczewski and spot on Jaki Liebezeit motorik drums by Orton, it builds and builds to a magnificent, almost classical crescendo before a twinkly fade out. Class, interplanetary or otherwise.

You’ll note I’ve tried to give an idea of the sound and feel of each track and here, and the closing number is my biggest challenge. ‘This Cities Undone’, is one of my favourite tunes of the year, I guess partly because it just is so damn indescribably brilliant – but I’ll have a go. Okay, so Yoko Ono is Godzilla, channelling Grace Jones’ Amazonian warrior queen vibe, she strides through a Metropolis, surveying the pollution whilst Acid Mothers Temple and The Chemical Brothers do psych battle with the ‘Hair’ soundtrack as Yoko sings about “Agent Orange lollipops” and descends into speaking in tongues.  Yep, it’s nuts, but what did you expect for a closing number from the disco at the end of the world – a faithful rendition of a John Denver tune?

This album is about as weird as it gets, but if you don’t enjoy it then you’re even fucking weirder. Instant classic.