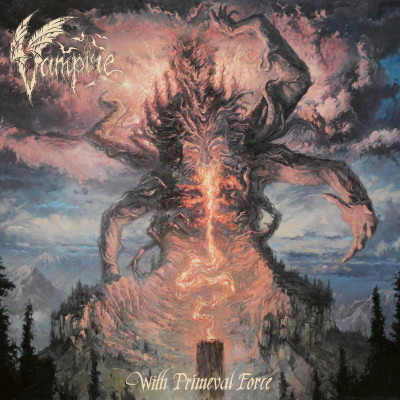 With Primeval Force by Vampire

I’ve heard Swedish death metal band Vampire’s previous albums and I wasn’t won over, which makes a listen to their latest album With Primeval Force one with lesser expectations. With Primeval Force isn’t blast end-to-end semantics that gets fans hopping, nor is it Swedish death metal of the buzzsaw variety that is still re-invented at present. Old-school fashioned, but not of the sort that gets plenty of tribute these days, Vampire’s With Primeval Force sees plenty of startling quality from start to finish. Fans who appreciate brutality without songwriting dynamics or melody will be disappointed, but so many fans of that type are typically won over with just a little blasting here and there. Vampire doesn’t leave me disappointed this time around. In fact, I’m quite impressed.

Blessed to discover this release and the tons of exciting melodies and riffs that it brings to fans, I am happy to express my approval of Vampire sticking with the style that got their demo sold-out in a short amount of time. It proves that if passion were to trump stubbornness and a band sticks to its guns even as their prior albums don’t make leaps and bounds, good things can happen. This is clearly the case with With Primeval Force, and the songwriting dynamics on here reveals a band at its creative pinnacle. It will be hard for the band to top this catchy as crazy latest album.

But that will evolve into an interesting next few listens to their future albums, and I am quite excited to see where the band takes their sound after this one. Track one to track nine are all top-shelf quality and easy to appreciate. The production sounds similar to prior efforts, but it’s all about the band’s music on With Primeval Force. The band come up with the goods here and have easily gotten me interested if I feel the same way I once did for their discography. They are a new find all over again, just like their demo was years ago, before all the hype that resulted in their kvlt status got them signed to major label Century Media Records. With Primeval Force cashes in on the promise of metal greatness they were hailed to lead years ago, and Century Media becomes the great architect of that briefly dashed hope.

Carefully plotting songs that evolve into one catchy transition and chorus after another, Vampire ignite my excitement for bands of its ilk. There’s a little Mercyful Fate here, a little Necrophobic, a little 80’s thrash influenced death metal the likes of which is rarely paid tribute effectively. Don’t let whatever perceptions you may have about Vampire dampen your itch to hear what this new album sounds like. Vampire just made my top ten albums of 2017 list and it should gain consideration for yours!