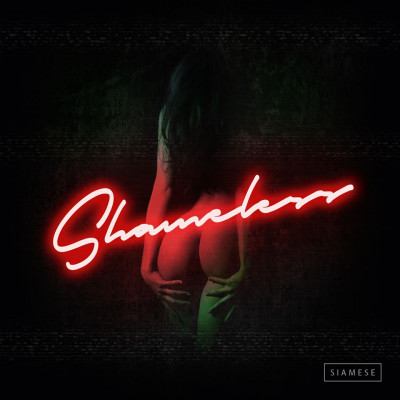 I have voiced my disdain for modern pop music and how I am inundated with it whenever I am in a vehicle with my wife and daughter. So, as I suffer through the Selena Gomez and Fetty Wap songs, it’s nice when something like Bruno mars or Macklemore comes on to give me hope for the future. Seeing as how lucrative the genre has turned, many a musician has tried to make their sound more accessible. Some seem to have done it overnight (Linkin Park, but only if you haven’t paid attention to ANY of their previous releases), while others build up to it. One band that rests firmly in the latter is Siamese (formerly Siamese Fighting Fish). Formed in Copenhagen, Denmark in 2011, they have always had pop tendencies, but have never fully embraced them until their latest release, Shameless, released June 23, 2017 via Artery Recordings.

Now when I say tendencies, I don’t mean they’re all backing tracks and auto-tune. I’m talking about the perfect song length, production, and hooks that can cement their songs firmly in your psyche. This is precisely where Shameless hits. As I mentioned before, if you have listened to Siamese’s previous releases, you know they have been working towards this for a while. Their self-titled album released in 2015 has many songs that could be compared to the tracks on Shameless, but the production or mix failed them. The dominance of Christian H. Lauritzen’s violin and natural sounding piano on most of the tracks were a detriment. On Shameless, these instruments are replaced with more guitar, some syths, and samples. This leads to a sound that’s just heavy enough to put Siamese in front of a Good Tiger crowd, and poppy enough to have them open for P!nk.

Everything about Shameless screams for it to be listened to, including the nakedness on the cover. Opening track/single ‘Ablaze’ is the new stalker’s national anthem, but the chorus is so catchy you can’t help but hum along. ‘Tunnelvision’ shuffles and dips, bouncing you right along through the ode to Justin Timberlake. The hook in ‘One Night Thing’ is so good you become as addicted to it as the love Mirza Radonjica sings about in the song. I don’t know if it was intentional or incidental, but Siamese pulls a Periphery and uses similar beats and melodies throughout the album. This not only helps with the flow of the album, but it makes each track seem familiar, which translates to multiple spins. ‘Brother’ is the first track you notice it, as Joakim Stilling’s shuffling beat from ‘Tunnelvision’ makes a reappearance. The next semi-call back is the gang choruses between ‘My Turn’ (previously released as ‘Avaritia’) and ‘Cities’. As strong as this album starts, it finishes even stronger. The last few tracks I mentioned, plus ‘The Promise’ and ‘Make it Out’ dial up the grooves and the hooks even more. Andreas Krüger’s guitar has just a little more grit on these tracks, as well as the epic breakdown at the end of ‘Cities’ closes the album on a heavy high. My copy of the album also included the bonus track ‘Never Be the Same’, which is also a fitting closer.

Siamese has honed their sound down to a razor-sharp, pop-tinged edge. I think this is the sound Siamese were always searching for, but maybe were afraid to find. Now that they’ve found it, they need to embrace it. If you’ve ever been a fan of this band in the past, I hope this is the band you wanted them to become. Shameless is a sparkling gem, and Siamese’s best album to date.