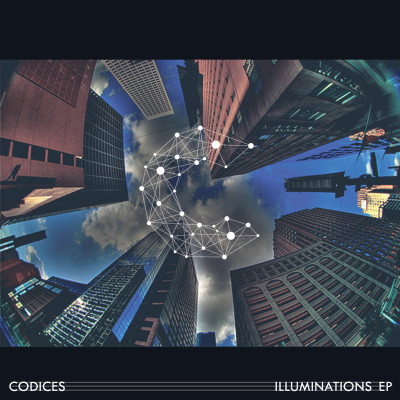 I don’t review a lot of post-rock; I find it very difficult to talk about, and Roget’s selection of available synonyms for “ethereal” is actually very limited. It’s a formula that’s difficult to make sound actively bad: it turns out minor chords with a lot of delay and fuzz sound almost unavoidably good. However, I think the consequence of this is that many post-rock bands are reluctant to take risks and experiment with more technically demanding instrumentation and production. For evidence of this, consider how many bands sound like Godspeed, and now compare that to how many bands sound like Explosions in The Sky. Codices debut EP is exciting because it’s not easy, Illuminations plays with odd times, major keys and sharp transitions, almost what I would imagine if And So I Watched You From Afar didn’t go all in on the math side of things.

The thing that sets Codices apart is, that unlike so much post-rock, it seems  everyone in the band wants to be heard, not in a punk-rock-loudness-war way, but that everyone seems to want to have something worth paying attention to.  The first two tracks have a lot of really engaging moments where staccato lead lines are contrasted against overdriven rhythm guitars in a way that almost sounds like a bizarre cross between Set Guitars to Kill and TTNG’s early work. The title track makes especially good use of this by incorporating odd time starts and stops in its outro which give it a sense of punctuation, rather than the standard “ethereal” drone I’m so used to.

The EP is really about ‘Amakudari’, the eight minute beast of a song that could be right off of Red Sparowes’ ‘At The Soundless Dawn’. It’s an awesome track that really captures the cathartic noise of some of the best mid 00’ post-rock bands, but with drastic tonal shifts somewhat reminiscent of Each Hand a Cutlass’s last album, The Kraken, that make it sound like a progression of the Sparowes formula rather than a soundalike. It’s easily the best song on the album, but I’m hesitant to call it the best Codices song; I feel like somewhere along the line they’ll learn how to forge their proggy, asymmetrical, staccato guitar melodies into a song with as much weight as ‘Amakudari’, and that will be the best Codices song.

However, track 3, ‘New Devices’ has a serious fault and I feel like this is a good place to address a wider problem, not just with Codices, but with hundreds of bands: letting weak, whiney, untrained vocalists ruin their tracks . Not everyone needs to be, or can be, Freddie Mercury or Anna von Hausswolff, to be a vocalist, but I don’t think everyone has the skill to sing, just like not everyone has the aptitude to play sitar (looking at you, the 60s). I doubt Codices would have allowed one of their members to attempt to add a cello part to a song if they could not play cello properly. I can’t understand why their standards for vocals are apparently so much lower than their standards for all other aspects of their album. I’ve never really bought into the idea that vocals can disappear and become part of a mix, in the same way as any other instrument, because the listener will always pick it out and give it more attention and find it impossible to ignore. The other problem with bad vocals is more often than not, good instrumentals are made to pay the price. A version of ‘New Devices’ excised of vocals would still be appreciably worse than anything else on Illuminations, because the song is written around the drastic limitations imposed by the vocals.

Despite what probably seemed like a lot of rambling about how much I don’t like ‘New Devices’, I actually like Illuminations a lot and I’m really excited to see what Codices do next. I’ve been finding it really difficult to get into new post-rock albums the last couple years, but Codices have made an album that stands out from the crowd by reaching back into a time when math-rock and post-rock were closer than they are now, and the genre hadn’t yet been boiled down into easily repeated tropes. Instrumental post-rock needs albums like this if it wants to stay relevant.