(((O))) Review: The Tangent – The Slow Rust of Forgotten Machinery 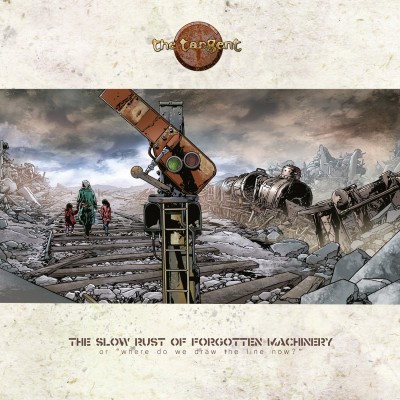 The Slow Rust of Forgotten Machinery by The Tangent

“The world changed. Not the band.” On their ninth studio album, The Tangent cites Roger Waters’ ability to communicate ideas about world affairs through progressive rock music. Admiring Pink Floyd’s Final Cut and Water’s Amused to Death, The Tangent remark how such music does not challenge the zeitgeist. However, with their new release, the band are engaged in political commentary by focussing on the plight of refugees and their treatment by the Western media. They also draw parallels between the construction of walls and borders with friendships. Whether geopolitics or a parable about life, The Tangent have used their new album as an expression of thought that all may relate to.

The Slow Rust of Forgotten Machinery takes an impressive hour and fifteen minutes to listen to from top to bottom; as such, it is not music for a casual listener. As with most classic progressive releases, this album has to be absorbed completely, and the song lengths alone prohibit listening to snippets only.

‘Two Rope Swings’, the shortest song by some length, opens the album with a dramatic piano and vocal introduction. Before the midway the mark the full band begins to enter into majestic instrumental joy. Some may class this as an overture of sorts, as it demonstrates several elements that the remainder of the album explores more fully.

‘Doctor Livingstone (I Presume)’ is a well-constructed instrumental song and with several different layers and recurring motifs, it demonstrates the virtuoso ability of the group but manages to convey decent melodies, without the necessity of a familiar vocal pattern. As a result, it is clear that The Tangent’s strength lies in their instrumental construction.

‘Slow Rust’ shows, however, that in the sections where both Tillison and de Gaultier sing in unison, the songs are immediately lifted lyrically. One criticism of progressive rock music is often the vocals, and when the instrumental sections are as complex as they are here, it can be hard for the vocals to sometimes be warranted. Generally, The Tangent manage to make the vocal sections interesting and relevant enough to be included, though some of the more descriptive verses could have some work.

The aforementioned ‘Slow Rust’ is the longest song on the album, at 22 minutes, and is the song with the most distinct passages of music. ‘The Sad Story of Lead and Astatine’ slows the pace slightly, introducing more jazz elements in the instrumentation. Nonetheless, the song continues to build on itself, as is often the case, in a style not unlike a jam; all the instruments seemingly bouncing off each other, improving each passage. The call and response section halfway through really adds an organic element to the song before hurtling back into the manic keyboard and guitar riffs, and then a jazz drum solo. Ambitious as ever.

‘A Few Steps Down the Wrong Road’ closes the album and it does not relent on the intricacy or intensity of its predecessors. With the use of profanity, it feels as though this song may carry an additional angst in its lyrics. In the closing sections, there are famous classical motifs, and hard rock riffs thrown in alongside woodwind instruments; effectively if anyone asked “what is progressive rock?” you would show them this snippet.

Through their extensive discography and fourteen-year lifespan, The Tangent believe they are ‘Re-Purposing Progressive Music.’ There is certainly a more modern sound to this record, but the traditions of classic progressive rock are certainly prevalent; arguably fitting in with the theme of re-purposing. Despite its great melodies, it does take endurance to listen to, but in the end, that is the reward of it. There are fantastic instrumental passages, and lyrics that, whilst may not be overly thought-provoking, certainly provide apt commentary.