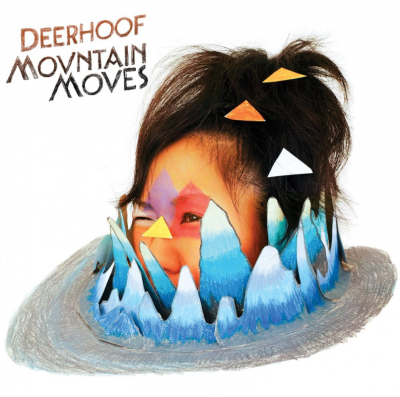 Twenty years on from releasing The Man, The King, The Girl, Deerhoof are still at the forefront of the DIY ethos, inspiring many and defying those who think that you can’t do things on your own terms if you want to get anywhere in the music industry – Mountain Moves is proof that this is still possible two decades into an illustrious career of genre bending soundscapes with the chops to back it up. This time around, they’ve enlisted musicians and singers from all walks of life to contribute in their own way, and the result is nothing short of amazing!

“The only common thread was that each and every artist on Mountain Moves doesn’t fit into a single, neatly-defined category – and doesn’t wish to” reads the expertly written press release (props to that guy). Part of the mould that Deerhoof themselves are responsible for, a perfect fit for all involved. The combination of people beavering away on tracks in the early hours whilst in hotel rooms, and some coming into the studio to participate makes for one of the best possible ways you can spend 40 minutes – and the consequential repeat plays will keep your ears thankful for the far, forseeable future.

‘Slow Motion Detonation’ couldn’t be a more apt description of the state of this planet right now if it tried, and throughout this album (and their entire discography) it becomes clear that Satomi Matsuzaki could sing the entire phone book and make it sound majestical. Actress/singer Juana Molina is the first of many to bring their sewing skills to this tapestry, and each addition only strengthens the foundation set by the band themselves.

Jenn Wasner from Wye Oak joins the ranks for ‘I Will Spite Survive’ with a chorus that no words to describe how uplifting it is could do it justice – and in the short time I’ve had this album to listen to has become one of the most played songs in my library! A glorious track and if the rest of the album wasn’t so incredible as well, it would be a highlight for me.

Elsewhere, Akwafina can be found spitting lyrics with vitriol and sass on ‘Your Dystopian Creation Doesn’t Fear You’, while the sound experimentalist Matana Roberts layers saxophonic bliss over the album’s title track. Stereolab singer Lætitia Sadier asks “who, is the coward?” on ‘Come Down Here And Say That’ with grin inducing vocals  over trampolining guitars – each track on this album should have it’s own review, they’re so good I could go on for days – but I won’t, for your sake!

Xenia Rubinos’ voice on ‘Singalong Junk’ go to show that words are not always necessary to have a resounding effect on the listener, as the “la la la la la la la” floats between your ears and cushions your brain. Old bandmate to Ed Rodriguez and John Dieterich (math rock quartet Colossamite for those wanting to dig further) drummer Chad Popple adds flavour to ‘Sea Moves’ alongside double bassist Devin Hoff.

As for the tracks that Deerhoof go at it alone – ‘Kokoye’ has one of the best, epic endings to a song that needs to be played at an earth shattering volume, before Satomi completely breaks down Bob Marley’s ‘Small Axe’ with piano and voice to leave you in a massive soppy puddle – “If you were the big tree, we are the small axe” never sounded so omnipotent. There are other covers here, and more tracks to discuss, but I can’t spoil the entire thing for you now can I? Feel free to get back to me though after your head has exploded with joy, and you’re very welcome by the way.

With so much fucked up shit going on in this world, Deerhoof are here to remind us good folk that you’re not alone, you are not lost, and Deerhoof are right next you holding the moral compass in their hands – showing you the way. Mountain Moves is a veritable feast of adventurous delights, a smorgasbord of post pop/punk perfection that we all need in our lives.  Album of the year in my most humblest of opinions.