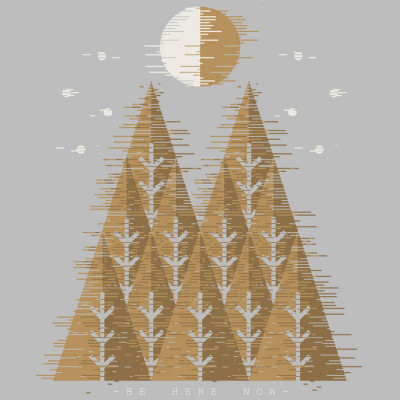 Be Here Now by Evolv

It’s funny how I never used to think the saying, “everything happens for a reason” held much truth. A couple of months ago I had become very down on myself over something personal that had happened to me. I ended up realizing that there was no reason to be down, because nothing will change what happened, so I started thinking more positively. Not very long after this, I was searching through the ambient section of bandcamp and happened to click on evolv’s (Stephen Perez) page because it looked interesting and it said Washington D.C. as his location (which is the closest major city to both of us). I listened to all of his albums and my ears were very pleased, but the first one that I listened to was his newest release Be Here Now, and from then on, I was hooked.

I added him on Facebook and he messaged me right away thanking me for adding him and supporting his music, and I remember saying, “no, thank you, you’ve helped me tremendously, plus we haven’t even met in person yet”. He had told me about a show that he would be performing at (June 30, 2017, Dharma Studios in Winchester, VA) that I should come to. I ended up going and meeting him, and I knew right away that he was one of the kindest and most caring souls I had ever met.

He introduced me to a good amount of the experimental music scene in the DMV area (District, Maryland, Virginia) and told me about future gigs coming up. I had never known that there was really an experimental scene like this around me until meeting him (who I consider a great friend), and finally I had become friends with people who shared similar interests. After all of my other friends had moved far away and the personal incident had happened, I tried staying as positive as I could and within in a month, life changed for the better, all because of evolv. Now onto the nitty-gritty about evolv’s Be Here Now.

Be Here Now is a very cathartic album and almost like a medicine to me. Whether I’m working at my desk with the album playing through my background speakers, or laying down with my headphones on, focusing solely in the record and the different sounds throughout, all of my anxiety and discomfort seems to fade away. Throughout the five tracks you’ll find some textural elements and a new approach to previous evolv material.

The album combines organic, electronic, binaural, lo-fi, and field recordings. Stephen has even told me how he loves to incorporate family into his recordings in one form or another. Towards the end of the first track “We’ll make an adjustment”, you can hear a recording of his grandfather counting dominoes. The other tracks are entitled “Badnew”, “Far be it from me”, “What do now”, and lastly, “And make a tradition out of it”. Evolv adds a clever and humorous touch with the naming of these tracks, as they are all out of episodes of “Always Sunny In Philadelphia”. The spiritual based book “Be Here Now”, written by Ram Dass, also inspired Evolv.

The album also features guest percussion by Richard Keefer (Coastlands) on tracks one, two, three, and five, as well as additional noise/texture on track three by musician Guillermo Pizarro. Be Here Now is highly recommended, and as it is like a medicine for me, the more people that listen to it, I think the more healed our world will be.

Nostalgia. Sleep Deprivation. I’ve always loved textured sounds…when I was around 10-12 I recorded a lot of “field recordings” on an old tape recorder- I remember falling in love with the dissonance of the textures and sounds with the natural hiss. As time passed I started to realize that chaos can be manipulated and even structured.

(((o))): I know you have a lot of nice gear…what did you start off making music with and how long has it taken you to get all of the equipment you have now?

I started off learning Flamenco Guitar and basic Piano. When I was around 14 my brother installed a copy of FL Studio on my computer and I just went to town on re-synthesis and manipulation…fast forward to two years back ( when I was 24) I started hanging out with a good friend Guillermo Pizarro and he showed me the world of electro-acoustic instruments and quality pedal builds – Over the last two years I’ve tried to use my computer as little as possible (except post production) and really utilize-learn my tools/instruments .

(((o))): There are many musicians that have families but don’t incorporate that into their music…I love that you are a family man that likes to incorporate family into your music…what gave you the idea of having recordings of family members in your music?

Definitely Nostalgia – I do mostly instrumental work so I love using relatable field recordings within my pieces 🙂 Plus they are a huge source of inspiration.

(((o))): What got you interested in field recordings and binaural recordings?

^Same^ I love listening back to something and feeling said thing rather just hearing. A lot of times in binaural recordings the listener is able to feel as if they are IN the recording even without context.

(((o))): How did you initially get into the process of licensing music and where has your music been used in film/tv/ads?

In 2006 – A company (which I won’t mention the name) offered to pay me to use a track in an ad of theirs (at this time I had no idea licensing was a thing ) After I started evolv I found out I was grossly underpaid for the Ad placement and started to do more research on licensing — from there I started applying to 3rd party licensing libraries .

(((o))): I really enjoyed your show at Dharma Studios in Winchester, VA…do you incorporate visuals into every show?

Thanks brother! Not into every show – but coming from a cinematography background I’ve always been obsessed with the loose story telling aspect of visuals as well. I try to incorporate when I can. I actually had another video prepared for that particular set but wasn’t working that night…glad the other creatives had a backup that worked just as well ?

(((o))): Lastly, what is your motto or mantra to music and life in general?

We Learn. We Grow.