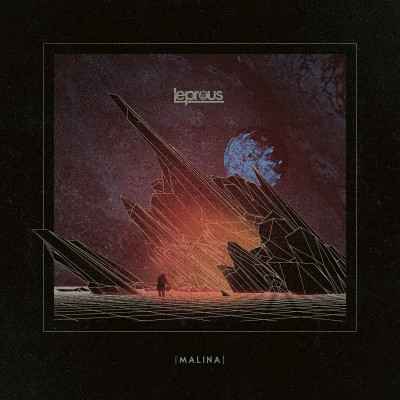 Some bands are hard to define. Whether it be their delivery, direction, or mixing of styles with songs/albums, some bands have to be referred to in a rather open genre. One such band that qualifies is Leprous. Since their inception in 2001, the Norwegian one-time backing band for former Emperor frontman Ihsahn’s live shows, has consistently been unique in their musical output. Never being too close to one style or the other has seemingly given them the ability to expand upon whatever ideas Einar Solberg (vocals/synth) and Tor Oddmund Suhrke (guitar) create. This can be a blessing and a curse; hence, my mixed feelings about their latest album, Malina, released August 25, 2017 via InsideOut Music.

Listening through Leprous’ discography, debut album Tall Poppy Syndrome sounds their most “straight-forward”, with each successive release becoming more quirky. My initial exposure to the band was from the second record, Bilateral. I found their quirks not to my liking, but something about it still intrigued me. The next album, Coal, although different, gave the same reaction. It wasn’t until The Congregation that Leprous locked me in. Songs like ‘The Price’, ‘Third Law’, ‘Rewind’, and ‘The Flood’ had the hooks that kept me listening. This is why I was excited for Malina.

The album starts out hopeful with ‘Bonneville’. Solberg’s falsetto glides over a tentative keyboard and rhythm section. It turns out to be a slow burn, as the song doesn’t crescendo until there’s about a minute left. Then the most recent single ‘Stuck’ kicks in. This is the hook I was looking for! Again, the bouncy rhythm section of Baard Kolstad (drums) and Simen Børven (bass) drive the track as they did on so many on The Congregation. The opening riff, along with a keyboard lick, roll throughout the track, as if on a loop. But what are these added strings on the extended ending? This is prelude of what’s to come. The hook again emerges on the next track/first single ‘From The Flame’. Oddmund Suhrke’s dancing riffs drive the verses, allowing the keyboards to mingle with the rhythm section. One of the more straight-forward tracks on the album, ‘Captive’, tries to keep up the hook train, this time with Solberg’s vocal propelling the song. ‘Illuminate’ is more of the same, along with that shuffling backbeat Kolstad and Børven have perfected so well. These themes play out elsewhere on the album in different ways, each instance just as good as the last. Then there’s the aptly titled ‘The Last Milestone’. The strings that were hinted at earlier come back in full effect, as it is only they and Solberg’s epically woeful vocal to close the record.

Now, as awesome as all this sounds, why does Malina leaves me feeling meh? I DON”T KNOW!!! I want to like this record so much more, but it’s just not there, and I don’t know why. Am I not refined enough to fully appreciate it? Probably. Am I expecting to have the same previous connection? Maybe. Either way, I’m not feeling it, and it irritates me. Maybe that will change over more listens, but right now with Malina, Leprous has me looking backward instead of forward.